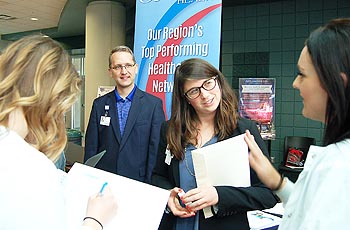 Covenant Health employees Nelson Leiser and Liz Floyd talk with Roane State students on the verge of graduating in healthcare fields during the annual Healthcare Job Fair, held March 29 at the college’s Oak Ridge campus.
When it comes to the burgeoning healthcare field, there are plenty of jobs out there.

That became obvious to some 200 Roane State students on the verge of graduating who took advantage of the college’s annual Healthcare Job Fair, held March 29 at the Roane State campus in Oak Ridge.

“There are a lot of potential job openings,” said Trista Murrell, set to graduate from the college’s physical therapist assistant program in August. She was handing out resumes to prospective employers and, she said, “everyone has been very helpful.”

Some 50 companies and institutions set up displays in the atrium and hallways of the college’s Coffey-McNally Building.

Employers included hospitals, medical clinics, nursing homes, healthcare recruiting firms and companies involved in medical record-keeping. Even representatives of the Army and the state’s prison system had displays. Prison nurses start out at $26.50 an hour, a spokeswoman said.

One Roane State student about to graduate in May, Cassidy Harvey, said she’s already landed a job at Blount Memorial Hospital’s radiology department but was at the job fair studying other options.

“It was a lot of hard work,” she said of her Roane State studies, “but it’s been worth it.”

Kim Harris, director of Workforce Training and Placement at Roane State, has organized the job fair for years. No other educational institution in the area offers a similar event, she said, and local healthcare employers “know about it and look for it.”

The job fair was a homecoming of sorts for one healthcare employee. Cynthia Plemens, development coordinator for the Michael Dunn Center, graduated from Roane State 18 months ago at age 50.

Entering the college at her age was very intimidating, she admitted. She said she was quickly welcomed and “really embraced” by the faculty and staff.

“I really thrived here,” she said of Roane State. “Had I not gone to Roane State and obtained a degree, I would not be in the position I’m in now.”

The Michael Dunn Center provides a variety of services to hundreds of clients with developmental disabilities, and job categories there range from nursing to physical therapy.

For more information about Roane State job placement, contact Kim Harris at (865) 882-4695 or at harriskb@roanestate.edu.