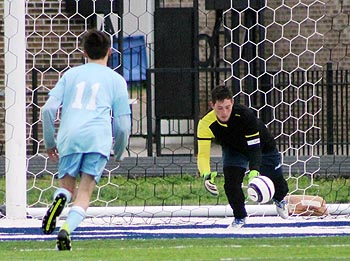 Anderson County goalkeeper Kyle Stringfield defends against Gibbs.
Anderson County soccer got its second victory of the season with a win over Powell on Tuesday night.

“The guys are starting to work together to find a way to win,” said Ron Roskelly, head coach of the Mavericks.

Caleb Bethel started the scoring off with one goal in the first half of the game. The Mavs had a number of opportunities, but struggled to find the back of the net in the first half. Daniel Goodman, Clayton Utley, and Reece Bailey put a great deal of pressure on the defense by making solid runs and good passing.

Anderson County found its rhythm during the second half of the game. The defense gave up one goal after an unfortunate chain of events. After that, the Maverick’s Drew Mullins, Chase Douglas, Logan Dixon defended their territory while sweeper Austin Miller and keeper Kyle Stringfield had their best game of the season.

The Mavs tightened down on Powell’s attack, which limited the Panthers shooting opportunities.

Logan “Clifford” Dixon did an excellent job marking Powell’s leading striker the rest of the game. The strong defense helped Anderson County move the ball into the midfield.

The ever-improving midfield, Brant Bailey, Cody Stringfield, Jay Collins, Tristin Eggards and Steven Bakaletz, did a good job distributing the ball to the attackers. Steven Bakaletz and Bryant Bailey were able to score assists out of the midfield with stellar passes to the attacking third of the field.

Bethel capitalized on the Mavericks improved ball movement to put three more goals in the back of the net, his final goal went in “rabona-style.”

The Mavericks topped visiting Gibbs 3-1 on a rainy Thursday afternoon for their third victory of the season.

Anderson County worked hard to keep possession of the ball, but struggled at times due to the cold and rainy weather. Much of the game was spent looking for solid footing and trying to gauge the bounce of the ball on the wet turf. The Maverick’s defense had another solid game as they only allowed Gibbs one goal.

In the first half, Bethel was able to find the back of the net with a pass from Miller. This was his second assist of the year. Utley joined the scoresheet shortly after the first goal. He worked the ball into the box, but was taken down in a hard tackle. This set him up to receive a penalty kick, and Utley capitalized by burying a hard shot in the back of the net. This was his third goal of the season.

The second half picked up speed with the Mavericks attacking, and Bethel put his seventh goal of the season in the back of the net on a breakaway run.

In the second half, Gibbs started to really push and found the back of the net. The Mavericks defense was able to weather the storm and didn’t let another point past them thanks to their hustle and strong effort.

Anderson County will play at Oliver Springs on Thursday at 6 p.m.

“Please come out and support the Mavericks as they continue to improve their game,” Roskelly said.