Students report back to school this week 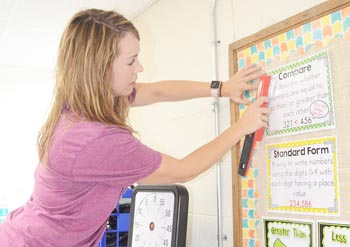 The district is expecting more students for the 2017-2018 school year than previous years.

According to Anderson County Schools Student Services Director Paula Sellers, the district is currently seeing the largest gain in enrollment in the elementary schools, but are getting favorable reports at the middle and high school levels as well.

“In the elementary schools, we’re packed, and we’ve still got parents trying to get their children into our district. We’re still getting applications days before school begins,” Sellers reported.

The largest of gains so far is Lake City Elementary where there have been at least 25 additional students registered to attend compared to this time last year, and with registration scheduled for Wednesday, Aug. 2, school officials expect to pick up even more students by the day’s end on Wednesday, Sellers said.

As of Tuesday, Aug. 1, a rough estimate of the total school system-wide student enrollment is approximately 6,518, Sellers said, but that number will likely change as more students register, some transfer, and still others move, which is a common occurrence this time of year.

Again, that enrollment figure will likely change once the school year progresses and students get settled, but school administrators are optimistic they will see an increase in students this year the way early estimates are looking.

He said these are “Tennessee revised standards” that educators started professional development on last year, and this year will be the year they go into effect. Another significant change, this one to high school and middle school, is in the school system’s guaranteed curriculum, Snider said.

The aim of a guaranteed curriculum is to provide every student in each grade at each school with the same level of rigor and the same standard of curriculum in the classroom.

The school district has also already received their test score reports from the 2016-2017 school year end-of-course examinations for students in grades 9-12, but those scores are currently embargoed.

“We’ve been training every day, so there hasn’t really been a chance yet to dissect yet where we’re at with that,” he said, commenting on the score reports that were recently received by the school from the state.

Snider said educators are in the process of reviewing the scores now.

Students and teachers expect to have a learning curve with these tests as they are revised state standards.

“Any time we get a new assessment it’s going to be a learning curve for educators and students. Once we get a chance to see and analyze the results, we will be able to use the information data to guide future instruction,” commented Snider.