The ‘Big Cleanup’ earns its name 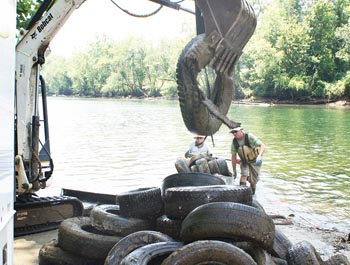 Larry Holm of Holm Construction picked up muddy tires with his Bobcat after volunteers brought them to the shore.
Nearly 2,200 pounds of trash plus 75 tires were hauled out of the Clinch River by the 103 volunteers who worked this summer’s Fifth Annual Big Clinch River Cleanup, sponsored by the Clinch River Chapter of Trout Unlimited.

Miscellaneous objects removed this year included an auto gas tank, a street sign with post, the front end of a Jeep and a child’s dental retainer.

Volunteers hailed from 30 ZIP codes, including Texas and California; they included a squad of Boy Scouts and a heartening number of families with children.

As in previous years, the Big Cleanup 2017 started with breakfast on the picturesque grounds of the Museum of Appalachia (expenses of the meal were supported by a grant from the Tennessee Valley Authority). From there, volunteers set out in teams to attack debris along the Clinch.

Above the water line, workers walked along riverside roads and through parking areas, gathering trash. In shallow water, volunteers wearing waders patrolled for litter. I

n kayaks and canoes, volunteers worked between Massengill Bridge and the Peach Orchard boat ramp to clean shorelines and shallow water where there is no access by road. Those in powerboats hauled tires and other items from the depths.

Support for all the teams was supplied by volunteering emergency medical people, ham radio operators, tire disposal professionals and volunteers with trucks who collected and disposed of filled trash bags.

Rusty Hallett of Norris, chairman of this year’s cleanup, called the results amazing. Thanking the volunteers, Hallett said, “It is a good feeling to know that you have done something worthwhile while asking nothing in return except the satisfaction of making a small portion of the world better.

“The Clinch River is the reason my wife and I moved to Norris. We both enjoy the river, we fish, we kayak, we walk the Songbird Trail. The river has become a center point of my life—I am so grateful for people who are willing to help keep it beautiful!

“Most people think Trout Unlimited is a fishing club,” Hallett said. “Well, most of us do love to fish—but the main focus of TU is conservation. Our goal is to make rivers and lakes more sustainable and available for everyone to use. We are not only fishermen and fisherwomen, we are very much conservationists.”

The Big Clinch River Cleanup got its start in 2013, an expansion of river cleanups conducted by the Clinch River Chapter since the late 1990s. Chapter member Buzz Buffington said he started the cleanups after he heard someone call the Clinch the Tirehole River, a joking comparison to Wyoming’s Firehole River. “I was mortified, and that was the genesis of the cleanups.”

Clinch River Chapter TU works to preserve and protect the Clinch River tailwater and its watershed through conservation projects and through education of children and adults in aquatic natural resources. Meetings are held the second Thursday of the month at St. Francis Episcopal Church, Norris, except when outdoor activities are scheduled.