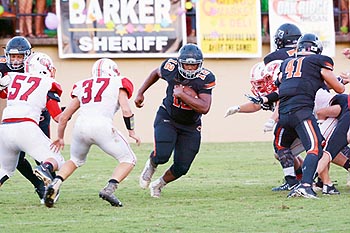 Clinton’s Trevon Hill runs through a hole in the Scott High defense opened by Isaiah Washington (8), Andrew Shoopman (41), and Daniel Moore (73).
It was only one game but it was the game Clinton High School fans have been waiting for since last December.

The Dragons knocked off visiting Scott 10-0 on Friday night to give Randy McKamey a win in his debut as head coach of his alma mater.

“You can’t win them all if you don’t win the first one,” McKamey told the team before the game started.

One of the largest crowds in recent school history filled City of Clinton Field for the game, which had a play-off like atmosphere prior to kick-off.

The Dragons got first possession but were unable to put together a drive and punted the ball away.

The Highlanders took over on their own 36-yard line but the Clinton defense showed up ready to play. Andrew Shoopman and Jackson Leinart had key stops and forced a Scott punt.

It rapidly became a theme of the very fast first half.

After each team traded possessions again, the Dragons marched from their own 22-yard line to the Scott 36-yard line and featured short runs by Reagan McKamey, Trevon Hill, Isaiah Washington, and Ro Hardin before the drive stalled and they turned the ball over on downs.

Johnny Hunter and Mazon Jenkins helped stuff the running game of the Highlanders and forced another three and out.

The second quarter opened in very much the same way as the first with both offenses struggling to find an identity and momentum.

Scott finally put together a 15-play drive that took them from their own 42-yard line to the Clinton five-yard line. On fourth and goal, the Highlanders opted for the 23-yard field goal attempt but the kick sailed wide right.

The Dragons were held to a three and out but the Clinton defense came up big when Jenkins recovered a Highlanders fumble at his own 33-yard line with 43.7 seconds left in the half.

Dragons’ quarterback Luke Harrison scrambled for 12 yards and then connected with Jenkins for 10 more, as both men got out of bounds to preserve timeouts.

Anthony Shervington ran for six and on fourth and four, Harrison found Cody Parker for a 12-yard completion.

With three seconds left on the clock, Garrett Zody was called on for a 45-yard field goal attempt. The kick bounced off the right upright and the teams went into the half tied at 0-0.

Scott opened the second half with a seven-play drive but it stalled near midfield and they punted the ball away.

On third and goal from the seven, Isaiah Washington raced around left end for the score. He capped an eight-play, 50-yard drive. Zody kicked the PAT and the Dragons led 7-0 with 4:25 remaining in the third quarter.

On the ensuing drive it looked as though the Highlanders offense had found their groove as they went from their own 27-yard line down to the Clinton 25 on a series of short runs, a 16-yard pass, and a 15-yard personal foul penalty.

Just when it looked as though they had the Dragons’ defense on its heels, Jayven Booker recovered a fumble to give Clinton the ball back. McKamey, Hill, and Isaiah Washington rushed for enough short yards to give the Dragons a first down as the fourth quarter started.

Facing fourth and one from his own 49-yard line, Harrison pulled off a great fake and ran for seven to pick up the first down. Cameron Washington added five more yards as did Isaiah Washington. The drive stalled at the Scott 35-yard line and once again Zody was called on for the long field goal. The attempt from 47 yards was no good and the Highlanders got the ball on their own 20-yard line (the kick traveled into the end zone and by rule the ball was placed on the 20).

Hill stormed into the backfield and tackled the Scott runner for an eight-yard loss. The Highlanders could not recover from the negative play on first down and had to punt the ball away.

It appeared Jenkins had a punt return for a touchdown but it was erased by a penalty.

The Dragons eventually were forced to settle for a 28-yard field goal by Zody and took a 10-0 lead with 3:51 left in the game.

The Highlanders had one last gasp late but Hill made another tackle for loss deep in the Scott backfield and forced a fumble and recovered it. The Dragons recovered and ran out the clock.

“This means a lot. I told the guys. ‘This is for the people out there in the stands right now. Let’s go out there and show them we appreciate their hard work and just getting things ready for the season.’ It’s for the fans and it means a lot to the community,” McKamey said.

“We didn’t have a good night offensively. We’re struggling right now on the offensive line. We’ve got a few injuries but I felt like the defense played well. We forced four turnovers and we’re going to hang our hat on that,” he said.

The offensive numbers were not pretty for Clinton.

The Dragons used 10 different ball carriers to pound out 143 yards.

Hill had seven total tackles including 3.5 for a loss, a forced fumble, and a fumble recovery.

Parker had four total tackles, a forced fumble, and an interception while Johnny Hunter and Daniel Moore each had seven total tackles and a tackle for loss.

The last Dragons’ game with 10 or fewer points scored came way back in 1992 when Clinton beat visiting Oak Ridge 6-0.

The Dragons (1-0) will host Seymour this Friday.