Lady Mavs open with a pair of wins 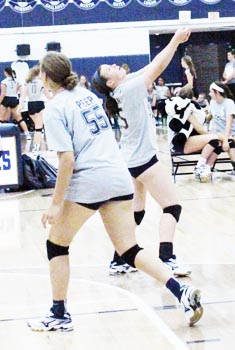 Anderson County freshman Hannah Freeman and sophomore Ashlynn Phillips (55) in recent action.
The Anderson County Lady Mavericks volleyball team opened the 2017 season with a pair of wins on Tuesday as they traveled to Alcoa where they beat the host Lady Tornadoes in two sets.

Senior Annalyse Leach had eight points, one ace, and 10 digs.

In the second match, Anderson County bested William Blount by in two sets by scores of 25-22 and 25-22.

On Thursday, the Lady Mavs fell at home to Bearden.

Senior Hannah Headrick had four kills and two blocks in the loss.

The Lady Mavs rebounded with a win over visiting Sevier County, winning two sets by scores of 25-14 and 26-7.

Anderson County returns to action on Friday and Saturday when they play in the JV and varsity early bird tournament at Oak Ridge.

Times are to be announced.