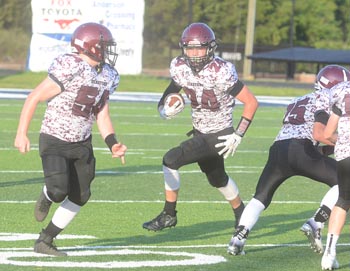 After the Senator’s defense forced a turnover on downs to open the game, Norris took over the Lions’ 48-yard line. Disaster struck Norris as a fumble on the snap was scooped up by a Concord Christian defender who raced toward the end zone for an apparent touchdown. He was stripped from behind by a hustling Anthony White and that fumble rolled through the back of the end zone and resulted in a touchback to give the Senators the ball on its own 20-yard line.

The Norris offense sputtered and could not get anything as they were hampered by a couple of penalties. They punted the ball away, giving the Lions the ball on the Norris 40-yard line.

A false start penalty pushed Concord back to its own 45 before their quarterback faked a handoff and raced around the right side for 45 yards and the score. He also ran the keeper on the two-point conversion to give the Lions an 8-0 lead with 3:10 left in the first quarter.

The touchdown served as a wake up call to the Senators.

On the second play of their next possession White raced 60 yards for a touchdown. The two-point conversion attempt failed and with 2:05 remaining in the first quarter, Norris trailed 8-6.

The Senators forced another punt and took possession on the Concord 39-yard line.

Three plays later, White broke a 40-yard run for a touchdown to give Norris the lead. The two-point conversion attempt was no good but the Senators led 12-8 with 7:00 left in the first half.

Once again the Senators’ defense stepped up and forced a turnover on downs to give Norris the ball on its own 48-yard line.

Two plays later, quarterback Tate Russell connected with Bryson Vowell for a 26-yard touchdown pass. The two-point conversion pass from Russell to White was good and the Senators led 20-8 with 2:03 remaining in the half.

The defense shut down the Lions and the teams went into the locker room with Norris holding the 12-point lead.

On their first possession of the second half, the Senators struck again as Russell found Garrison Terry for a 30-plus yard touchdown. The two-point conversion failed but the Norris advantage swelled to 26-8 with 6:54 remaining in the quarter.

The fourth quarter saw Norris Head Coach Richie Noe substitute freely as the Senators were happy to take time off the clock and seal the win.

“We played solid defense. Kaleb Livingston is a pretty special guy defensively for us right now and anytime you give the ball to Anthony White good things happen. We’ve got other weapons. Nick McCall has played well. Our whole offensive line — Sully Sexton, Jaxon Noe, Shawn Hill, Patrick Hooks, and Steven Beaty — have played well. Garrison Terry got into the end zone for the first time in a while tonight, so that was nice,” said Noe.

The Senators travel to Clinton for a showdown with the Hawks on Thursday at 7 p.m.