Learning other cultures through dance 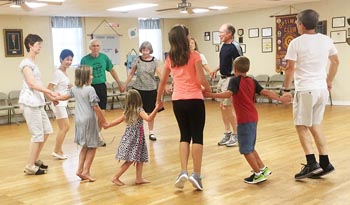 This group, dedicated to learning and dancing folk dances from a variety of countries, was first established by Roger Knox in 1944.

Knox was one of many that had relocated to Oak Ridge to work on the Manhattan Project.

According to current club president Barbara Taylor, “So many people were working in Oak Ridge, but they weren’t living in Oak Ridge. People who knew folk dancing would do it on the buses or the trains as they rode home from work.”

The Folk Dance group was one of many clubs and in-house programs created during the 1940’s to entertain the residents and workers of Oak Ridge.

Currently, Barbara and Paul Taylor lead the Oak Ridge Folk Dancers. They have been dancing with the group for 43 years and began leading about 30 years ago.

The group meets weekly to learn folk dances from various countries throughout the world.

As Taylor said of their variety, “There are so many folk dances. Old, old folk dances... We usually do at least 30 dances every week. Anyone who knows a folk dance can lead it and teach it.”

One such dance, called the Cradle Dance or Basket Dance, originates from Romania and involves mothers walking in a circle and holding their year-old baby to celebrate the child’s survival of their first year of life.

Taylor advised, “Most of us can watch and follow along. It depends on the person. Most of the dances we do have people holding hands in a line. Some dances are very easy, and some are fancier.”

In addition to their weekly meetings on Wednesday, the group also participates in and hosts workshops to learn new folk dances from professional teachers who specialize in a specific country.

The group invites anyone to come participate with them, to dance and to teach new dances.

The Oak Ridge Folk Dancers meet on Wednesday evenings at 7:30 pm at the Claxton Community Center.