The long and winding road

Finding Hwy. 116 solutions not as simple as they would seem 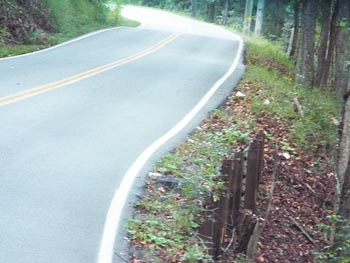 County officials toured Hwy. 116 (New River Highway) last week with TDOT personnel to get a first-hand look at the particular perils along the roadway, and problems in correcting them.
Anderson County Commissioners, Mayor, school officials and residents met with representatives from the Tennessee Department of Transportation (TDOT) Tuesday morning, Sept. 26, to discuss the need for more guardrails along Highway 116, also known as New River Highway.

Dist. 4 Commissioners Tim Isbel and Shain Vowell planned the meeting with TDOT early last week after hearing from residents in their district that more improvements are needed.

In 2013, TDOT committed to funding $1.2 million to make improvements, which included paving sections of it, widening the shoulders in places, including more signage, pavement markings and adding guardrails.

Gary Kite and his wife, Jackie Kite, residents of Braden Flats, attended the Anderson County Commission meeting last month and apprised commissioners of the hazards that motorists are still encountering on the road.

The Kites said their main concern was for the safety of the children who ride the school bus most days to and from school.

“Our primary concern is for our children. We’d like to see more guardrails put up,” Gary Kite said.

Local officials and TDOT representatives loaded a school bus and toured the highway to identify the problem areas and discuss possible repairs, if any can be done. A video camera was placed in the bus to underscore the road’s hazards and to highlight the need for more guardrails and safety measures.

Drop-offs, blind curves, steep slopes, and sharp switchbacks are some of the perils motorists currently face while driving on the road.

The purpose of the visit from TDOT’s perspective was to identify hazards, get information from residents and officials about what are the most problem areas, and report their findings back to TDOT so TDOT can assess the sites and determine what can be done to make the road safer, stated TDOT engineer Kristin Qualls to local officials Tuesday.

“We want to look at what we can do to improve safety. We want to hear from you what are the issues with the road and hopefully we can address some of those needs as we do a drive through today,” Qualls said.

According to Joe Fogerty, Transportation Director at Anderson County Schools, Highway 116 has been a safety issue the school system has been trying to deal with for quite some time now.

“Backing a school bus on that road is a trick in itself,” said Fogerty, who has heard on several occasions from the school bus drivers on that route of some of the dangers on that section of road.

“It was a county road that the state took on in the 1980s. This road was given to us, and was not a road that was designed and planned by TDOT. It’s one we kind’ve inherited and with that we’ve got a lot of issues with it, issues like stability issues, slope issues,” stated Qualls.

Highway 116 is one of the roads TDOT spends more money on per capita of lanes traveled than any other road in the 24 county region, Qualls said.

TDOT spends more money on the 11-mile stretch of road on 116 than “most any other road in any of our other counties when you look at per driver. The roadway user actually gets more money spent on that road if you look at Kingston Pike in Knoxville and the amount of users. It’s very skewed,” noted Qualls.

ACSD Chief Deputy Mark Lucas, who was also present for the meeting with TDOT representatives Tuesday, provided crash reports and statistics on the roadway that the sheriff’s department has on file documenting some of the accidents that have occurred in the last few years.

“Overall safety is what we look at. Go over there on a Saturday or a Sunday. You got ATVs sharing the road with motorcycles. We had a motorcycle crash last week,” Lucas said, detailing how the road is becoming more congested as more people from out of town visit Anderson County’s recreational attractions.

“Since the first of this year there’s been seven crashes involving injury and three non-injury crashes,” continued Lucas. “One or two of those crashes involved vehicles going over the embankment, and one, I think it was this year or last, we had to call the Campbell County rope team to get somebody out from the embankment because our rescue squad doesn’t have that.”

Lucas noted one particularly dangerous section of roadway locals refer to ominiously as ‘the Devil’s Triangle’ he has observed as being especially hazardous to out-of-town motorcyclists and is known as an area with high crash rates.

“There are motorcycle riders that have never been on this road and when they’re traveling it and round a curve to find the whole road is full of gravel—something they’re not expecting—and down they go. They’re expecting a paved highway, and what they get is gravels that are washed out,” he said.

Sections of the highway are not paved.

The Devil’s Triangle is a 44 mile loop that includes sections of highways TN 62, TN 116, and TN 330, and is located north of Oak Ridge, in the area of Oliver Springs. The road is highly frequented by motorcyclists and adventure enthusiasts.

Also interesting is which vehicles are involved in more wrecks.

“Half of the wrecks involve motorcycles,” Lucas reported.

“Most of the wrecks involve motorists going over the line,” he said, and “almost every weekend our people know that something’s going to happen there.”

During the bus tour TDOT representatives were able to see first-hand the hazards residents are seeing on a daily basis. When the tour was complete, TDOT representatives that they would return to the site in a few days and start doing some marking to prepare for an assessment of the sections of road deemed most hazardous to motorists.

TDOT engineer Casey Wood, who is in charge of road maintenance for TDOT, apprised local officials he saw where some sections could be patched by TDOT and stated that he would look into which areas can be patched to improved safety.

Qualls stated that she would also have TDOT’s Geotechnical Operations Office review the sections that have rocks jutting out next to the road to determine if something can be done to mitigate these potential dangers.

Gary Kite asked if it was possible for TDOT to cut back some of the plants and trees—saplings and elephant ears—that have grown up around the curvy sections of road. The growth from the foliage currently obscures the view of oncoming traffic.

Removing the saplings would allow school bus drivers to see what vehicles are coming around the curve and would “give them the ability to stop for log trucks,” he said.

The road is still used as a logging road.

Fogerty also noted that the bus driver who drives that route has considerable difficulty traveling a section of the road that appears to be “tilted in the wrong direction.”

“If we could take a look at that, that would help. How the road bed is angled makes a big difference between how the weight of a bus shifts—buses are top heavy,” Fogerty stated.

“I think the area Fogerty’s referencing is some four miles up from the county bridge,” noted Isbel.

Anything TDOT can do to make the roadway safer is going to be “greatly appreciated” by the school system and the residents who live in that area, said Fogerty.

“Hopefully we can get a lot done. We’ve all been worried and praying about it for a long time. My biggest fear is a bus going over [off the road, over an embankment] and I know a guardrail is not made to hold the weight of a 25,000 lb school bus, but if there’s something to be done to mitigate it, it would go a long way,” he said.

TDOT representative Charles West, who does guardrail inspections for TDOT, explained to officials some of the intricacies involved in guardrail testing criteria and the pros and cons of having a guardrail installed.

Guardrail manufacturers are required by the Federal Highway Commission to test the guardrails they manufacture, West said.

“Guardrail manufacturers test the guardrails two different ways: head-on in the guardrail, and then at a 25 degree angle. It’s a go, no-go kind of thing for the guardrail if the car hits it and it deflects off and without flipping or anything then the test is considered a pass. If the vehicle flips or goes over or under the guardrail or the head of the guardrail collapses the wrong way it’s considered a failure, but that’s all it’s tested for,” stated West.

A particularly hazardous situation West noted is one in which the slope is at a two to one and there’s a six or eight foot guardrail post sticking out of the ground and situated only 40 inches in the ground.

“If I can’t end it properly in a safe manner then it’s no use putting it in because if someone hits the end of the guardrail it’s more dangerous than hitting the side of it,” he said.

Fogerty responded that the school system and the people who live there realize with the degree of problems the road has that the road is not going to be completely safe, but the mindset is to try and make the road safer.

“Anything that can be done to lessen the probability of things happening or mitigating the impact if it does happen will help with safety. In the school district we have an old saying and it applies here: ‘it’s not a matter of if something will happen, but when. What we want to do is everything we can to lessen the impact if and when something happens,” stated Fogerty.

At the end of the meeting Tuesday Qualls stated that TDOT would continue to email commissioners with updates, and that she expects TDOT will have a status update on the possibility of making road improvements in about two weeks.

An update would entail which areas TDOT has identified to be fixed, and if so what the timeline would be to get those areas repaired. If no locations can be fixed, she said TDOT would provide an explanation of reasons why the locations cannot be repaired at this time so residents will have information.

Isbel stated he would be including this discussion in the upcoming County Commission Operations Committee meeting this month so it will come before Commission for more discussion.