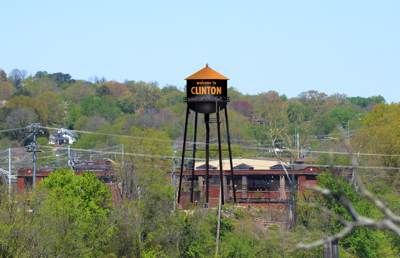 Mellissa Snead of Clinton’s Historic Zoning Commission again went in front of Clinton’s City Council in an effort to move forward plans of preservation for the Clinton Water Tower.

Snead noted that the water tower was one of the only historic landmarks that remained in Clinton, after the train station and other landmarks had been demolished.

In a presentation she and her colleagues had prepared, she focused on the idea of distinction.

The idea that if you cultivate a distinct and prosperous town, people will follow.

“People of all ages want to move to small towns like Clinton,” Snead said. But there has to be a distinctive factor. Something that helps the city stand out from the rest.

Snead and her colleagues believe that distinction starts with preservation of the water tower.

“While change is inevitable, the destruction of the unique character and identity is not. Progress does not demand degraded surroundings. Communities can grow without destroying the things that people love.” Snead quoted Edward T. McMahon, an esteemed urban designer.

In McMahon’s essay, The Distinctive City, he discusses what community distinctiveness is and some ways to cultivate it.

McMahon stated that a study found that the most important factors that create emotional bonds between people and their community were not jobs and the economy, but rather “physical beauty, opportunities for socializing and a city’s openness to all people.”

“In the end, it’s all about future economics, about vision to invest now for tomorrow. We must pay attention to our towns appeal.” Snead argued. Snead read aloud a letter from a citizen regarding their history with the mill. In the letter, they wrote, “the tower is a symbol of a thriving

Though the mill is in ruin

and the subject of legal turmoil, still the tower remains,

“serving as a warm beacon for both visitors and locals.”

The Historic Zoning Commission is not only focusing on preserving the water tower, but also developing a thriving community around it. Snead presented proposed plans with green spaces, walkways, more trees and lighting.

There has been a lot of work put into this project thus far with far more work and research being imminent.

But for now, Snead and her team can consider themselves inching closer to their goal.