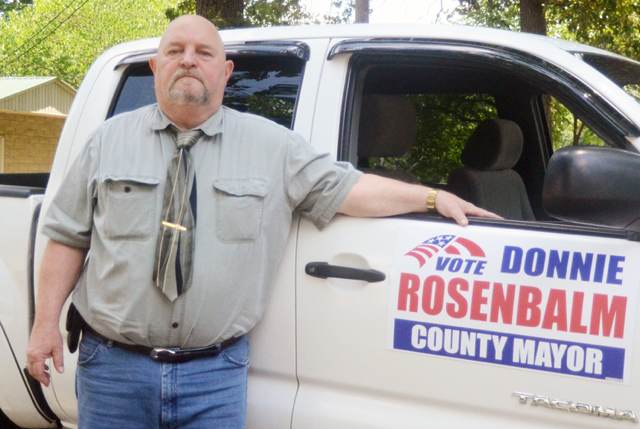 He calls himself, “Just a common Joe.”

But what he is doing is a very uncommon thing.

Donnie Rosenbalm, Clinton resident, graduate of Norris High School, supervisor at Clinton Utility Board for 20 years until his retirement in 2008, and “Common Joe,” has entered the race for Anderson County Mayor as a write-in candidate.

“I told my wife I was going to run and she asked, “Are you crazy?’” Rosenbalm laughed.

He’s not crazy, he said, but he is concerned.

“I really think the citizens of Anderson County deserve a choice when it comes to voting,” he said.

What led Rosenbalm to throw his name into the mix for County mayor is the perceived “bickering” between some members of the Anderson County Commission and the County Mayor, and within the Republican Party. He pointed out Mayor Terry Frank’s 153 vote margin in winning the May Republican Primary.

“I never dreamed I would be running for office,” Rosenbalm said. “It’s not something I’ve always wanted to do, but I don’t dread it either.”

But, he said, he feels he can work with all sides because of his experience as a supervisor with CUB.

“There were two fellows who, if you left them alone, would start slugging it out within five minutes,” he said. “And my boss said, ‘I’m putting them with you.’

“I told the fellows, ‘You can either work and get the job done, or go home.’”

“You need to treat people like you want to be treated. If you treat people with respect, that’s how they’ll treat you,” he said.

Rosenbalm said he has several platforms — ideas — he would like to see the county implement. He wants to work with the county school system to begin some form of after school care that does more than serve as baby-sitting. He wants to incorporate classes that address teen suicide and self-esteem.

“What’s the saying? One ounce of prevention is worth a pound of cure? Our government should be for everybody. For senior citizens, for working men and women, and for our youth.”

Rosenbalm would like to set aside one day of every week as a citizen’s day, where anyone can drop by and talk about issues concerning them.

“The ‘boss’ is the people of this county. Elected officials work for them so you better be ready to listen to them,” he said. “You pay your taxes. You deserve the benefits from paying those taxes.”

“I’m not the smartest chicken in the coop. I’m not the dumbest. But I believe I can get the job done,” he said. “I also know that I would be asking a lot of people for help to get things done.

“Working together with our County Commissioners and other elected officials, bringing in more jobs so that we can continue to be prosperous, and having a government focused on our citizens are ways to have a community where everyone can be proud to live,” he continued.

For more information contact Donnie Rosenbalm by email at donnierosenbalm@att.net