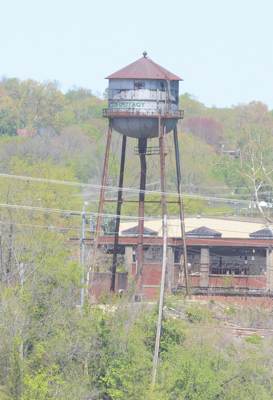 The Water Tower
In a meeting that took place in the Clinton Community Center Great Room, Thursday,

and a plan put in action for the property.

Gregg Pratt, legal council to the owner of Magnet Mills, stated that it could take 30 days to complete the structural

analysis and up to six months to complete remediation.

A little over two months after an initial ordinance meeting on the viability and potential demolition of the last remaining Magnet Mills structure, the 90-days being granted noticeably frustrated Clinton City attorney, Phil Crye.

Crye stated that he felt that this was just another way to “buy time” until it becomes obvious that the building needs to be demolished.

“The property owner has a history of doing things at the last minute to create delays,” Crye said.

In order to ensure that the structural analysis gets completed

in a timely manner, Judge Wilkinson suggested filing a demolition order that would be carried out if the owner failed to meet the goals set for him.

The owner of the property stated that he was suspicious over the city’s treatment of him and his venture.

“I think the city has a conspiracy

to deny us the best use of the property,” Huang said.

One of the potential uses of the building, if the structural analysis proves it to be stable enough, could be the conversion

of the structure into a parking garage.

Pratt also stated that there had been some interest in converting the structure into space for a restaurant and event center.

If after the 90 days it is proven that remediating the structure is a viable option that the owner is willing to pay for then construction will start immediately.

If it is proven that the building is too far-gone to be remediated then it will be demolished.