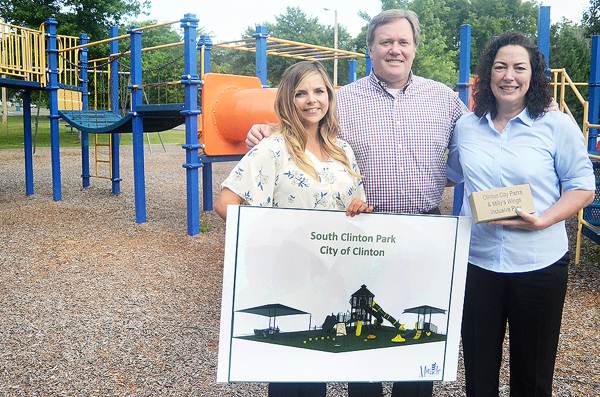 Work on renovating the park is scheduled to begin in the fall, with spring, 2019, targeted for opening.

David and Natalie Erb started Milly’s Wings in August 2015 in honor of their late daughter, Amelia, who suffered from a neurological disorder.

Milly’s Wings has been striving since then to install playground equipment that is inclusive to all children, disabled or not, in all the schools around Anderson County.

“The only time my daughter was like all the other children was when she was in the swing,” Mr. Erb said.

Through a conversation with Jason Brown of the Clinton Parks and Recreation Department, the Erbs were made aware of Christina McNally who felt a similar calling.

Emotions ran high as McNally said, “I want children like Amelia to feel like they have deep value and purpose in this world.”

McNally is a former elementary school teacher and was deeply moved by the existence of the all-inclusive park in Karns.

Last month McNally and Mr. Erb went in front of the County Commission to ask for their support in introducing Anderson County to its first all – inclusive park.

McNally stated that the special thing about the all – inclusive playground is that it allows disabled and able – bodied children to play together.

The effort has raised roughly 85 – percent of the money necessary for the playground and they are on the home stretch of fundraising.

One of the fundraising efforts they are using is a “Brick Raiser” campaign.

Families or businesses can buy a brick, which is engraved with something they’d like it to say.

The bricks will be laid as a paver walkway from the playground to the bathroom facility, which is also a focus in the renovation plans.

If you are interested in getting involved with the “Brick Raiser” campaign you can find information for that here, https://www.fundraisingbrick.com/online-orders/southclinton/.

You can also find information on how to get involved along with detailed photos of the plans on Facebook at https://m.facebook.com/SCinclusivePLAY/.