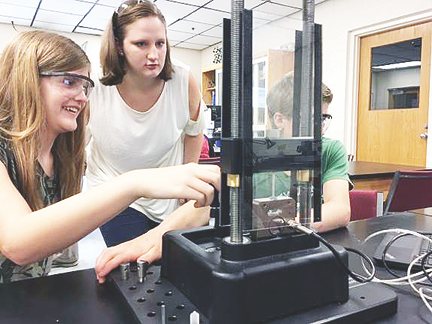 Materials camp participants work with their graduate-school mentor to perform tensile testing in a lab at Pellissippi State Community College. — Submitted
High-school students from Middle and East Tennessee; Tampa, Florida; and Bowie, Maryland, briefed family members and materials science professionals and a panel of judges on their work following a week-long materials camp held in Knoxville and Oak Ridge.

The 22 students were given a fictional whodunit involving sabotage in space at the beginning of the camp. After dividing into four teams, they were provided samples of the galactic incident to examine.

At the end of the week, each team presented their analyses and conclusions.

Team HDPE (high-density polyethylene) won the competition and will present their work at a local ASM meeting this fall.

The Composite team was honored as most creative by the judges.

Steve Dekanich, a Y-12 metallurgist who helped coordinate the camp, praised this group as the best he’s encountered since he began working with the camp in 2006.

“The students were incredibly intelligent and worked well as a team,” he said.