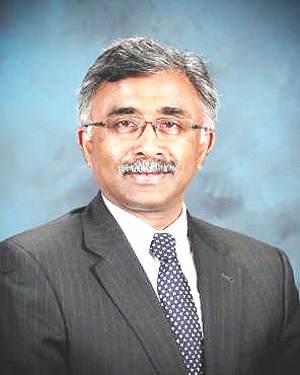 Thomas Zacharia
The 21st Season of the Dick Smyser Community Lecture Series continues Thursday, July 26, featuring Dr. Thomas Zacharia, Director of the Oak Ridge National Laboratory (ORNL) and the President/CEO of UT-Battelle, LLC, which operates ORNL for the U. S. Department of Energy’s Office of Science.

Dr. Zacharia will talk about the scientific agenda at ORNL in a presentation titled Science and the State of the Lab. This event is co-sponsored by Friends of ORNL (FORNL) and the Oak Ridge Public Schools Education Foundation (ORPSEF).

The event is free of charge and will be held at the Pollard Technology Conference Center, 210 Badger Avenue, Oak Ridge, Tennessee.

The talk will be of interest to students and the general public.

He is responsible for a diverse portfolio of science and energy research and development that ranges from fundamental research in physics, biology, and chemistry to clean energy, national security, and energy generation, distribution, and end use.

He is responsible for an annual budget exceeding $1.5 billion.

Dr. Zacharia joined ORNL in 1987 as a postdoctoral researcher.

During his career at ORNL his numerous managerial and scientific responsibilities have included serving as leader of the Materials Modeling and Simulation Group, director of the Computer Science and Mathematics Division, Deputy Associate Laboratory Director for High Performance Computing, and Associate Laboratory Director for the then-new Computing and Computational Sciences Directorate.

Prior to becoming Lab Director, he served as the Deputy for Science and Technology, overseeing the Laboratory’s R&D programs.

Dr. Zacharia holds a B.S. in mechanical engineering from the National Institute of Technology Karnataka, Surathkal, India, an M.S. in materials science from the University of Mississippi in Oxford, Miss., and a Ph.D. in engineering science from Clarkson University in Potsdam, N.Y.

He holds two U.S. patents and is author or co-author of more than 100 publications on high-performance computing for manufacturing processes.

FORNL is an organization formed to facilitate and maintain a beneficial association of those who have an interest in ORNL (Oak Ridge National Laboratory).

FORNL provides a mechanism for members to keep in touch with co-workers, retirees, and current ORNL activities by providing the community at large with presentations and events.

More information can be found on the FORNL website is www.fornl.info.