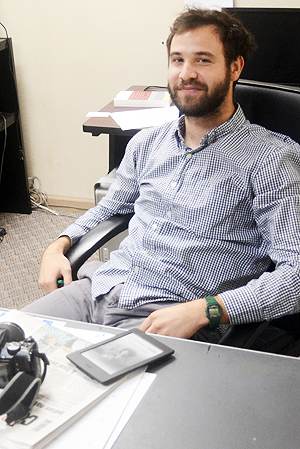 Nicholas Skoda
Tuesday marked the last day at The Courier News for Nicholas Skoda, who is leaving for a new life adventure outside of Anderson County.

Just how far outside of Anderson County?

On Aug. 16, he and his girlfriend, Shelby Sharp, will leave for Chaing Mai, the second largest city in Thailand. He is not on a secret mission to take over as lead singer of an indie rock group, to direct remakes of classic Bruce Lee films, nor has he accepted the job of head coach of the Thai National Soccer Team.

Nick is going to Thailand to … teach English?

“As much as I would love to be going to take some prestigious position, we’re going to go ‘rough it’ for a couple of months and try to figure it out. Essentially we’re going to teach English. When you do that you have to go get certified to teach English in a foreign country, which is a TEFL (Teaching English as a Foreign Language) Course. It’s a month-long course and once you take it, you’re certified to essentially work in other countries teaching English,” he said.

Skoda said the course would be a refresher for him on different bits of the scholastic side of the English language.

He said they are going to take the training course through Chaing Mai University, a research university founded in 1964. The course has been offered for more than 10 years at the school.

The TEFL course they are taking is privatized, meaning there are no government ties to it. He said the Thai government has already endorsed his student visa.

“I will be a student for three months there. You essentially get placed in a job. It could be a state school, working for the government, or in a private school, maybe working with adults or after-school program for kids. That institution — wherever it is — will endorse my next visa,” Nick said.

A graduate of Hardin Valley Academy and Carson Newman University, where he played soccer, Nick started at The Courier News in the middle of February of this year.

“Hate to lose him, but you know what? I’m really excited for him,” The Courier News editor Ken Leinart said.

“This is a really great opportunity for Nick. I hope he has a blast and makes the best of the experience. I’ve enjoyed working with him, but something like this … It’s pretty cool,” Leinart said

And how long does Skoda plan to stay in Thailand?

“We bought one-way tickets,” he said with a laugh. “We don’t have a plan. Usually when you sign a contract with these schools, it’s at least a year. Depending upon how much I love and/or hate it, it could be one year or 10 years. It’s such a new experience I’m not sure what to even think about it until I get over there. ”

He said Shelby studied in Thailand while in college and she knows the area somewhat.

“She is a little of the inspiration behind me going and a little bit of the safety net,” Nick said.

Once certified as being able to teach English as a foreign language, his certification would allow him to travel to other countries to teach as well.

“We discussed that because my ancestors are very heavily based in the Eastern European area — in the Czech Republic, Hungary, and what was once Yugoslavia. I would like to do Budapest or Bulgaria. I would really like to do that but we don’t have a distinct plan yet,” Nick said.

He said he never really considered the idea of using his pending certification to travel from country to country.

“I did always have in my mind how cool it would be to not necessarily be a world traveler but to experience all of these different cultures. I think that when Shelby brought up this idea it kind of sparked a fire that may have been burning underneath a little bit that I hadn’t considered a realistic opportunity,” Nick said.

He said he expects a major culture shock going from working in Clinton on a daily basis to studying in Chaing Mai.

“The good thing is when you take this course it’s primarily English-speakers you’re taking it with so I’m assuming there’s a good chance to become friends with people in the same situation — and that will help. It’s going to be something I’ve never experienced. I think with my type of personality — I kind of go with the flow — I’m confident in my ability to adapt to whatever the situation is.”

He said he does look forward to being in a city with a professional soccer team.

“I’m excited about getting to go to games and witness a professional environment, which is something you don’t get in this area. Being in a condensed area, there’s going to be a great deal of it [soccer]. I’m a massive soccer fan. I love the game,” Nick said.

He said he believes soccer can help him adapt to the culture.

“Soccer is the universal language. You don’t have to speak the language to understand the game and other people’s passion for it. I still play for fun and I’m sure there are leagues I could get involved with and that could definitely help,” he said.