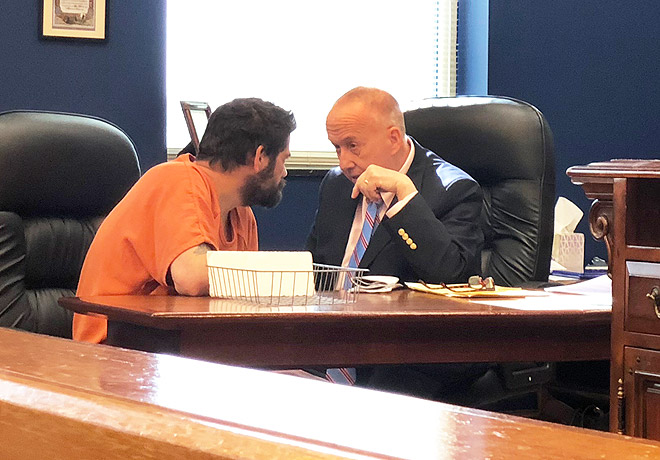 Michael Christopher Simonds, 38, talks with his public defender before his hearing Friday. (photo:Crystal Huskey )
“[The victim] was subjected to an evening of terror,” said Judge Don Layton after last Wednesday’s hearing between defendant Michael Christopher Simonds, 38, and his alleged victim, “which included a minimum of aggravated assault and a minimum of aggravated kidnapping. The allegations are very egregious and there is probable cause.”

The case has been moved to criminal court, with no hearing scheduled yet.

The court heard that the victim finished her shift at a business in Norris at 9 p.m. The business owner’s brother, Michael Christopher Simonds, planned on walking home that night, but due to the weather, the victim offered him a ride home.

The rest of the night quickly became a nightmare.

The 45-year-old victim gave her testimony for more than 30 minutes regarding her alleged kidnapping and assault, enduring examination and cross-examination by her and the defendant’s attorneys.

“Do you know Christopher Simonds?” she was asked by her lawyer, assistant district attorney Virginia Walsh.

“Yes,” she responded. She pointed him out.

“Were you working at your normal place of business?” Walsh asked.

“Was anyone in the vehicle with you?” Walsh asked.

“Not at first,” the victim responded, leading into a description of what all happened that night.

Simonds got in her car, she testified, and then she drove to pick her son up from a babysitter. Her son, 11, hopped in the back seat. She drove to Simond’s house on Norris Freeway and pulled into the driveway so that she could turn around rather than back out onto the freeway.

He asked her to get out of the vehicle and hold a flashlight for him so that he could connect power to a camper he was staying in just outside of a home owned by his parents.

He then asked her to take a step inside.

It was then, according to the victim, that he attacked.

Holding a fixed-blade knife to her throat, he demanded that she take off her clothes, which she refused to do.

He attempted to bind her with zip ties, but she fought him off.

He attempted to smother her with a pillow, stating multiple times, “This is happening.”

He choked her and left two cuts on her neck.

When her son came looking for her, Simonds ran off and the victim and her son escaped.

She lost her glasses during the altercation and struggled to leave the property.

The rain made the yard and driveway a mudpit, and she ended up getting stuck until an officer, Anderson County Sheriff’s Chris Paul, arrived on scene.

At some point, the victim stated that Simond’s mother and sister showed up, although she doesn’t know how they were alerted.

When Simond’s public defender cross-examined her, he honed in on the time of day and the possibility that it may not have been dark.

He stated that June 21 was the longest day of the year, and asked if she was sure that on July 6, it was actually dark around 9 p.m.

She said that yes, it was dark, and it was also storming.

He also questioned the responding officer, Chris Paul, on whether evidence was handled properly.