Dragons come up big at the Donny Dome 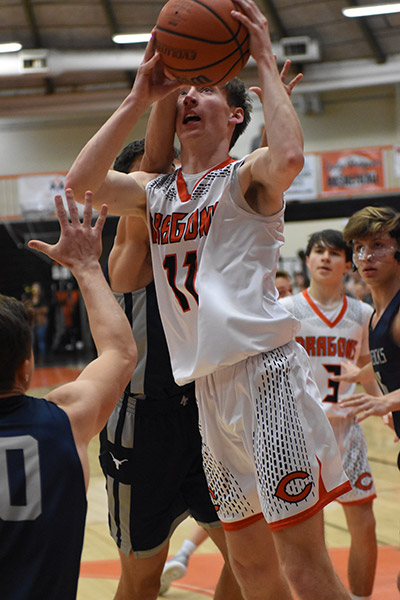 Clinton’s Luke Harrison drives to the hoop for a score Friday night. (photo:Conner McCarty )
The Clinton High School Dragons (14-13, 6-6) hosted cross-town rival Anderson County (16-10, 8-5), last Friday, before traveling to Carter on Saturday. Sitting in fourth in the District-3AAA standings, the visiting Mavericks came into the matchup seeking to sweep Clinton in regular season play, as well as lock up the district’s fourth seed—which comes with a solidified first-round bye in the District-3AAA Tournament. To keep their slim chances at a possible four-seed alive, Clinton faced a must-win situation against their rivals, in front a packed-out Donny Dome. In front of their home crowd, the Dragons’ 9-0 scoring run combined with an Anderson County scoring drought would be the deciding factors in the fourth quarter, and Clinton downed the Mavs 55-49. Clinton senior Luke Harrison would lead the Dragons’ scoring, putting up 14 points in the win. “It meant a lot for me to put up those numbers against our rivals in my last home game against them, and for me to do what I could do to help my team get the big win,” said Harrison.

Clinton controlled the opening tip and maintained that control throughout the large part of the opening quarter. While neither team started the game shooting lights out, by five minutes into the first quarter, the game already had some noticeable aspects — especially offensively.

For Clinton, Senior Luke Harrison was the Dragons’ go-to guy early on. Harrison would score five of Clinton’s first seven points and assisted the other made bucket. His efforts propelled the Dragons to an early 9-2 lead. “I felt like I could get mismatches all night long — being a 6’3” guard that can score on the perimeter and also go inside and get some easy post touches and scores,” said Harrison.

For Anderson County, it was easy to see that the Dragons’ size impacted the Mavs’ offense early on. In the half court, knowing points in the paint would not come easily — Anderson County’s three guards exchanged possession as they patiently weaved across the three-point arc.

Through this action, the Mavs looked to exploit Clinton with dribble penetration off the weave’s natural ball screen, a mismatch on a switched defender, or by spreading the floor and attacking the isolated on-ball defender.

While the Mavs failed to find an offensive rhythm in the first quarter, Anderson County did find a way to keep the ballgame close — the free throw line.

Although a transition-heavy game would have favored the Dragons, Anderson County was able to earn a few uncontested points from the charity stripe, to complement their four first quarter field goals.

Fortunately for Clinton, the Mavs converted only three of their eight attempts from the line and would begin the second quarter with a 14-11 lead.

After the water break, Clinton would go back to work offensively. Even in half court sets the Dragons moved the ball around the Anderson County defense with pace and purpose — which led to good, high-percentage shots.

The Dragons’ second quarter scoring opened up when Evan Winchester drove and kicked a cross-court pass out to Harrison.

On the opposite wing, Luke Harrison would attack baseline on two dribbles — this pulled his man-marking defender to him and forced the ball-side post defender to help.

As the double-team approached, Harrison rose up and dished a quick pass over the top of the double-team, into the paint, to a wide-open Demarcus McKamey who cashed in an easy layup. Harrison’s assist on that play showed-off some of the senior’s basketball knowledge and that play would spark a quick 5-0 Clinton run.

Trailing 19-11 with around three minutes left in the quarter, the Mavs needed to counter.Defense led to offense when the Mavs earned three consecutive stops, which turned into points on the other end of the floor.

An Eli Varner triple, an Anthony White free-throw, and Grant Hayes three would put Anderson County within one possession of taking the lead, with around two minutes remaining in the half.

On the Mavs’ last possession of the half, Eli Varner would drive from right-to-left across the lane and pull-up just beyond the left block, and kiss a jumper off the bank and in.

The Mavs fought hard to keep the game close. Anderson County would start the second half with possession and gain their first lead of the ballgame just seconds into the third quarter.

Senior guard Grant Hayes would drill a triple from just left of the semi-circle to put the visiting Mavs up 25-24.

Much of the third quarter was an up-tempo, back and forth affair—as the largest lead in the quarter would be just five points.

After a quarter where neither team could grab the momentum or a three-possession lead, Clinton held a slim 39-36 lead over Anderson County.

Junior point guard Evan Winchester would end the scoring drought with a contested runner in the lane, which he kissed off the glass and in.

For the Mavericks’ faithful, the fourth quarter had to be tough to watch.

“The Cardiac Kids” have found a way to grind out close, fourth quarter victories in dramatic fashion all season.

And the clock began to work against them, plus fouls had put Clinton in the bonus. In the fourth quarter alone, the Dragons would attempt 22 free-throws.

A couple Dragons’ buckets plus some made free-throws would give Clinton their biggest lead of the game, 48-36, with 1:42 to play.

With 1:42 left in the fourth quarter, Anderson County had not scored since the 1:20 mark of the third quarter — almost eight minutes.

With, 1:32 left to play, a Grant Hayes jumper would end the Mavs 7:50 scoring drought—he would finish the night with 15 points.

With under a minute to play, Stanton Martin tried his best to make things interesting, as the senior hit three consecutive attempts from downtown—Martin would finish the contest leading all scorers with a game-high 16 points.

However, the Dragons converted on 12-of-22 free throw attempts in the fourth quarter, which would be enough to seal the 55-49 win over rival Anderson County.

Defensively, Clinton’s fourth quarter was outstanding. “We had to rebound and stop (Anderson County’s) drives to the basket. (Anderson County’s) offense is based on driving to the rim and kicking out for open shots, so we did a lot of drills based on those things in practice to get us ready for the game,” said Harrison about his teams defending and preparation.

Harrison was big on the boards too and was only one rebound away from reaching a double-double. Offensively, Evan Winchester and Jackson Garner would also hit the double-digit scoring mark for the Dragons, as they finished the night with 11 points each.

The following night, Clinton earned another tough win against a quality opponent.

The Dragons traveled to Carter High School and defeated the Hornets, 70-65. This week, Clinton will wrap up regular-season play.

On Tuesday, the Dragons host Campbell County before traveling to Powell on Thursday.