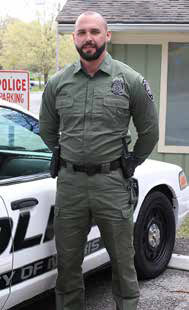 He officially took over on May 13.

He wants to build strong bridges with the community.

“I’m making sure that our officers are here,” he said, “instead of outside the city like they’ve been in the past. The businesses and residences here are the priority.”

There is more crime in Norris than people realize, according to Ogburn, but most of it is on the outskirts of town, like at Norris Dam State Park and the shopping center at Andersonville Crossing.

“There is crime here,” he said. “My biggest thing is to be a deterrent to that crime. Having the guys go out and run the roads with the businesses and residences, having them seen is a big deterrent for a lot of people.”

Earlier this year, an employee at the Dollar General reported that her car had been stolen. Ogburn responded and reviewed the security footage. He saw a young woman walk back to where the bathrooms were and shake the victim’s jacket. The keys fell out, and the woman took them out to the parking lot, where she hit the key fob, found the vehicle and stole it.

Ogburn recognized the woman as someone he had arrested before when he worked for the Anderson County Sheriff. He and Investigator Mike Poole looked her up on social media and discovered that she had shared a selfie of herself at a Rocky Top Weigel’s restroom — with the keys in her hand.

They were able to arrest the woman and return the car to the employee within a week.

Ogburn has already made several changes within the department, the most noticeable of which is the uniforms. Officers now wear a green Class B uniform, which is better for the wooded, more natural environment in Norris.

“We have a ton of trees and the Norris watershed,” Ogburn said. “These won’t wear and tear like the polyester ones do.”

Ogburn wants to make sure the community knows he has an open-door policy and is available anytime someone wants to talk.

“In the past, it seemed like people were afraid to come into the police department,” he said. Kaine was police for two years, and Danny Humphrey was there for over 20 years prior to that. Humphrey remains an accessible presence in the community.

Right now, there are five full-time police officers in Norris, and Ogburn is in the process of hiring one more.

He said he tries to avoid micromanaging and simply trusts his people.

“They know what to do,” he said, “and they go out and do it. I see us on a good path moving forward.”

Ogburn was on active duty in the Marine Corps for four years, followed by two years in the Reserves. He was then an officer with the Oak Ridge Police Department for three years, the Anderson County Sheriff’s Office for eight years, and has been in Norris for almost four years.

“I have a good support group with my wife and three kids,” he said. “They’ve been very supportive throughout my whole career. “