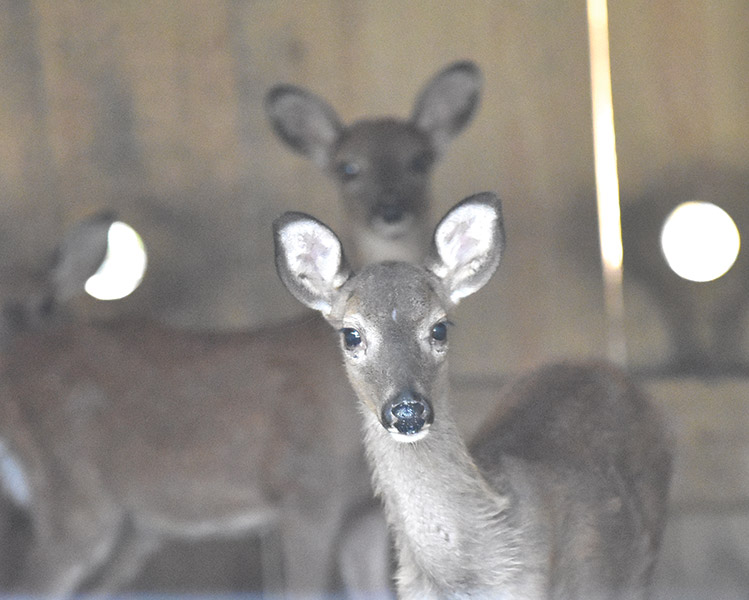 Three baby deer all huddle together in the sanctuary. These will be part of the second group of deer released by TWRA. (photo:Collin Riggs )
Five miles outside the Clinton city limits, running parallel to the railroad tracks, sits the Little Ponderosa Zoo and Rescue Center.

Well-known in Clinton, the little zoo and rescue center achieved nonprofit status in 2011. In 2017, though, it was the subject of tragedy when a fire swept through the visitors center, destroying it and killing a number of animals.

The community rallied around the little zoo, though, and through donations from across the community, including several from companies around the city, Little Ponderosa rebuilt the visitors center bigger and better than ever.

Del-Air donated eight HVAC units, and Copeland Electrical did all the wiring and electrical work throughout.

Since that dark day, the zoo has been on an upward trajectory, expanding further out and rescuing even more animals.

This year, Little Ponderosa became the first rehabilitation center for white-tailed deer in East and Middle Tennessee, taking in close to 60 deer in the spring.

Behind a gate at the back of the zoo, through a field of tall grass and up a small hill, sits the small fenced-in enclosure where the baby deer are kept.

A dark net around the bottom of the fence keeps them from clearly seeing anyone approaching, and a decoy mama deer sits against one side. A bottle is inserted through a hole in the fence, just beneath the decoy, so the fawns believe they’re feeding from their mother. In the facility the site is called, “In the Beyond.”

James Cox, the director and founder of Little Ponderosa, explained what it takes to rehab the deer.

“We try to make sure they’re released back into the wild no longer than 120 days after,” he said. “We cut the trees and the foliage around [the fence] and it’s put into the enclosure so [the deer] can learn to eat like they would out in the wild.”

TWRA recently released the first 28 of the rehabilitated white-tails back into the wild, on reservation land in the Upper Cumberlands. The cost, though, has been difficult. Walmart and local businesses help with feeding the larger animals, with grocery stores donating out-of-date produce and meat that would otherwise go to a landfill, but the baby deer have to have formula. Each 40-pound bag is $225, and during the peak season, they go through at least a bag a day.

In 2018, though, Little Ponderosa started a very different kind of rehabilitation program.

“You’ll see guys working around the facility and on the back of their cover-alls, it’ll say ‘Zoo Crew.’ Those are state convicts,” said Jones.

In 2018, Cox, after being trained as a guard by the state and with the help and approval of Sheriff Russell Barker, began using state inmates to help with the everyday running of the facility. Today, he says he’s not sure how he ever got by without them.

“You know, you can throw them in jail, and if they’ve done something wrong, they need to go to jail,” Cox said. “They do. But it’s not helping them. And this way, you know, we’re helping not only the deer, but also our community. I go and pick them up every morning, seven days a week, and they come and help us. They feed the animals, they care for them, they do a lot.”

Only two inmates have been paroled since the program started, but Cox said they’ve done well, and he even helped to find them jobs.

Giving back to the community that’s shown him so much support is important, Cox said.

“I could not do it without our community and the blessings of our creator,” he said. “I’m not a religious man, but seeing these animals – they just come completely covered. They know what to do in the heat, what to do when it’s cold, all that.”

The center relies on donations and goodwill, and if you would like to donate, please visit littleponderosazoo.com/partner/ or call 865-457-5536.