Dragons come back for first win 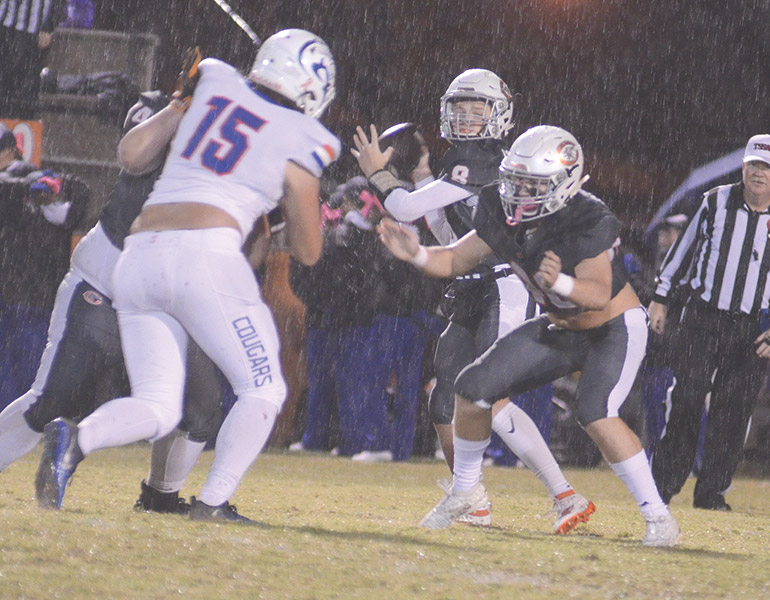 Dragon quarterback Trace Thackerson lines up a pass downfield as he gets protection from Connor Moody. (photo:Ken Leinart )
Overcoming a game-long downpour, the Clinton High School football Dragons scored their first victory of the 2019 season Friday when they defeated visiting Campbell County 12-7 on homecoming night.

Connor Moody scored both Dragon touchdowns, and team leading tackler Will Briggs recorded more than 10 stops as Clinton (1-8, 1-4 in Region 3-5A) ended a nine-game losing streak dating back to last season.

Clinton’s home field held up under the rain, but the last few series of the game were a slog for both teams.

“That’s what I just told the seniors. The way that game ended is how they’ve played all year, whether you’re down by 30, or you’re down by 14 or you’re up by six—that’s the resiliency of that group,” said Dragon head coach Randy McKamey. “And they’ve fought all year. It’s been unusual. I haven’t seen that. I’ve been coaching a long time, and usually when things go bad people start giving up. They never checked out. I’m so proud of the seniors tonight.”

Moody rushed nine times for a team-best 51 yards and a touchdown and caught a team-high four passes for 40 yards and another tally.

Dragon quarterback Trace Thackerson recorded nine rushes for 29 yards, many of the yards coming on unexpected quarterback sneaks. He went 8-for-12 through the air for 82 yards and a touchdown.

Clinton wideout Evan Winchester lined up at quarterback several times and went 2-for-3 passing for 23 yards. He rushed five times for 29 yards, caught three passes for 40 yards, returned a kickoff for 24 yards, and returned a punt for 3 yards.

The Dragon defense held the Cougars (4-5, 1-4) to 56 rushing yards on 21 carries. Briggs recovered a fourth-down fumble in the shadow of the Clinton goalpost when the Cougars were close to a TD. Edwin Resendiz intercepted two passes for the Dragons.

Bryce Collins booted three outstanding punts that pinned the Cougars deep in the second half.

Leading Cougar rusher Daymon Seiber changed his muddy jersey at halftime and carried 16 times for 64 yards. Campbell County quarterback Hunter White looked to pass on more than half the plays but ended up only 10-for-23 for 119 yards and a touchdown.

Clinton turned the ball over on downs on the first possession of the game, and Cougars took over on their own 26. Six plays later, they found the end zone as White hooked up with Devlin Dukes on a 61-yard TD pass. Dukes was wide open when he caught the ball at the Dragon 35 and broke a couple of tackles on his way to the end zone.

The Dragons, helped by two Cougar personal-foul penalties, could not score and again turned it over on downs at the Campbell County 22. The Cougars, with Briggs tackling Seiber for 1 yard on first down, went three-and-out and punted to the Dragons.

Clinton took over on its 42 as the second-quarter began and went 58 yards in nine plays for a touchdown. Winchester passed to Resendiz for 18 yards on third-and-12. A Campbell County unsportsmanlike-conduct penalty moved the ball to the Cougar 27. Runs by Winchester and Eli Deshomme got the Dragons close, and Thackerson’s sneak on fourth-and-one at the 18 gave the Dragons a first down. On second-and-two from the 8, Moody ran around left end and beat the defense to the front-left corner of the end zone for Clinton’s first TD of the game.

A bad snap on the extra-point kick led to a two-point conversion run by Winchester that fell short, leaving the score at 7-6.

The Cougars returned the kickoff to their own 36 and with Seiber’s runs and pass-catching drove to the Dragon 10. Seiber ran 9 yards to the 1, and Campbell County had three cracks at the goal line but failed to penetrate the Dragon defense. Briggs stopped Seiber for no gain twice, and on fourth down the Dragon senior linebacker recovered Seiber’s fumble at the 3. Clinton would take over and close out the half down 7-6.

“That’s one guy we just called out in the [postgame] huddle out there, Will Briggs,” McKamey said. “He’s been that consistent guy all year. As a leader some people do it vocally and some people do it by their actions, and that’s that kid right there. That was a huge stand. We talked about that at halftime, what this game could have been like had they scored. The defense sold out. Obviously they fumbled on fourth down, so I think that was the big turn of the night.”

The minute side of the scoreboard clock went out shortly before halftime, and the rest of the game was played with the clock kept on the field by the officials.

Campbell County took a short kickoff by the Dragons at its own 48 to start the second half. Dukes gained 11 on a screen pass, but on a first-down run he was flattened by Trevor Linderman for a 10-yard loss. The Cougars eventually punted to the Dragons.

Clinton reeled off a long drive, helped by a 15-yard Thackerson run and a 22-yard pass to Winchester, but the Dragons’ series stalled at the Cougar 10.

Resendiz intercepted White on the fourth play of the next Campbell County possession, and the Dragons took over at the Cougar 22. Deshomme ran for 8 yards, and on the first play of the fourth quarter Moody caught a 14-yard Thackerson toss for his second touchdown of the game.

Winchester’s run for a two-point conversion failed, but the Dragons held their first lead of the game.

Campbell County turned the ball over on downs, but the Dragons couldn’t move the ball themselves. That set up Collins’ first punt, a 33-yarder that backed the Cougars up to their own 2-yard line.

The teams then traded punts, with punter Collins again shining with a 30-yarder to the Cougar six. Dogged by penalties, Campbell County advanced only to its own 21, whereupon Resendiz picked off his second pass of the game with 1:38 left.

The Dragons ran the clock down under 40 seconds before Collins punted to the Cougar 15. Campbell County failed to advance on the last two plays of the game, and the Dragons celebrated victory in the rain. Clinton, Campbell County, and Karns (2-7, 1-4) are tied for fifth place in the region.

The Campbell County win may have been ugly, but that was appropriate, McKamey said.

“I told the guys tonight it’s kind of fitting,” the Dragon head coach said. “It’s been a very ugly season. Let’s just call a spade a spade. For us to get that win tonight, as ugly as it was with the rain and such a low-scoring game, it’s kind of fitting. I told our kids, I don’t care who they are and what the season ends up as, whether it be 2-8 or 1-9, they’ll never forget tonight with those conditions that they’re in.

“It’s been tough on the coaching staff. I know it’s been tough on the fans, the Dragon faithful who sat through the rain tonight. It was just miserable. Rain or shine, they’re going to be here for us. Hopefully, we’ll build off this. We’re playing a really, really good Karns team. Their record may not show it, but they have athletes all over the field. They’ve won a few surprises this year. We’ll have our hands full, but I’ll let our kids enjoy this all weekend. We’ll come back Monday ready to go to work to finish the season out strong.”