Lane closures on downtown bridge to last until May 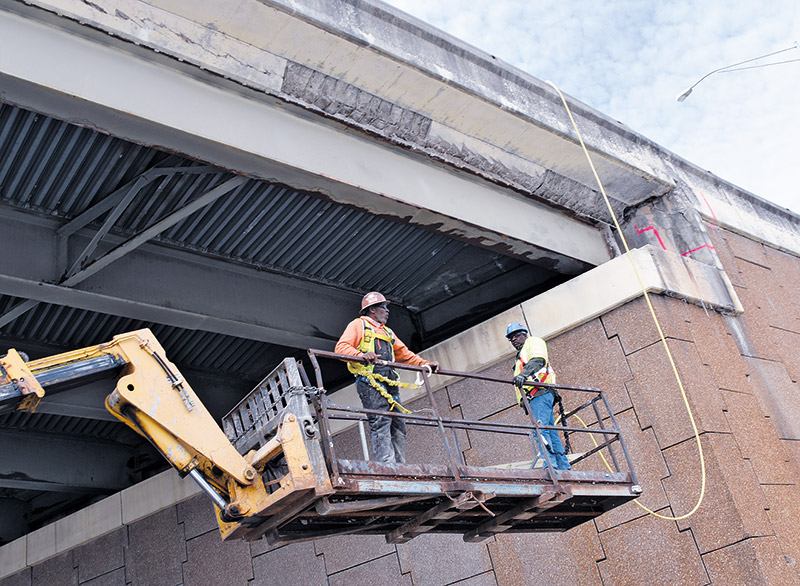 Denver Reed, left, of Knoxville and John Nicely of Morristown ride a lift up to the side of the bridge over Market Street in downtown Clinton on Monday, Nov. 11. The two are working on a project to repair the crumbling concrete sides and sidewalks of the bridge, which carries Charles G. Seivers Boulevard traffic. The two men work for Southern Constructors Inc. of Knoxville, contractor for the project. (photo:G. Chambers Williams III )
Lane closures on the Charles G. Seivers Boulevard bridge over Market Street and the Norfolk Southern Railroad in downtown Clinton will continue until completion of the bridge repair project in May, officials said Tuesday.

When work on the project began about two weeks ago, the eastbound right lane was closed, forcing traffic coming from the west to move into the left lane.

Clinton City Manager Roger Houck said that traffic pattern will be in effect for about two months, then the two center lanes will be closed for about 40 days before the closure shifts to the left lane for westbound traffic until the work is finished.

Engineer Tim Horton of Southern Constructors Inc. of Knoxville, contractor for the project, said the work includes concrete patching of the bridge overhangs and sidewalks on both sides, and removal of the asphalt roadway surface.

The asphalt will then be replaced by an “epoxy overlay,” with “flintstone rock sprayed into it for better grip when it’s raining,” Horton said.

“The epoxy seals the bridge off and makes the surface waterproof.”

Horton said the work is being done in three phases, with the overlays on the right side going east getting rehabbed first. A look at those sides of the bridge on Monday showed that cracks are prevalent throughout the concrete.

The second phase will run about 40 days, during which the two middle lanes will be closed, and traffic will be down to one lane in each direction, Horton said.

The third phase will see the westbound right lane closed for work on the overhangs and sidewalk on that side, he said. Besides the lane closures on the bridge, there also will be periodic lane closures with flagging operations on Market Street under the bridge as work progresses overhead, Horton said.

The scheduled completion date is May 15, but that depends on several factors, including the weather, Horton said.

Denver Reed, one of the Southern Contractors workers on the job Monday, said all the cracks will be repaired with concrete patching, and the sidewalks will be patched to look like new.

Reed and co-worker John Nicely were working on the overhangs on the south side of the bridge from a hydraulic platform, about 20 feet above Market Street.

The total cost is nearly $1.5 million for the bridge rehabilitation, Horton said. The company will have about 10 workers present on the site for most of the time the project is underway, he added.