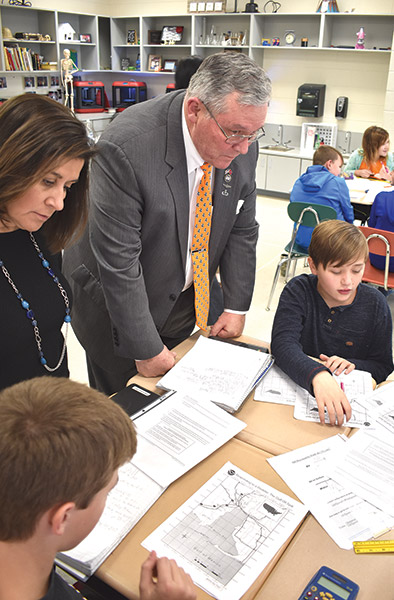 State Rep. John Ragen (District 33) looks at some of the findings from students in Kimberly O’Dell’s sixth-grade science class as they work out a solution to contain an oil spill in the Gulf of Mexico, based on the Deepwater Horizon spill in 2010. Pictured with Ragan is Lori Collins, supervisor of federal programs for the Clinton City School System. (photo:Ken Leinart )
The state of education in Tennessee has enjoyed unprecedented success.

State Representative John Ragan took time out of his schedule to talk about that success and how the state can continue to make strides.

He was in Clinton recently to visit Clinton Elementary School, a Rewards School, to witness first-hand part of Tennessee’s education growth.

Ragan noted Tennessee climbed from 49th to 35th in education.

Tennessee leads the nation in academic growth, and it didn’t happen overnight. Ragan, who sits on the state’s Education Committee, saw up close how Tennessee’s climb from 49th took place.

“Change is hard, as they say,” he said. “Human nature is to resist, even if the change is for the better.”

“There were complaints,” he said. “But they (educators) found out a lot of that (the negative perceptions) wasn’t true. That it actually worked to benefit educators.”

Yes, he said, it was disruptive at first. But look at the growth.

Unfortunately, he said, “We didn’t maintain that rate of growth.”

Ragan does not like to use the term “stalled,” and instead says the education growth “plateaued.”

One of the problems the state faces is the teacher turnover rate. Ragan said the state’s Education Committee is looking at that and finding that some teachers are entering the workforce unprepared.

“Not unprepared to be teachers,” he said. “But unprepared to be in the system and some of the requirements needed for that. Teacher turnover, especially with the early ones, is unacceptably high and it’s something we need to address.”

Ragan said teachers’ colleges have to make some changes to better prepare educators to enter the “system.”

“They (teachers) get frustrated; it’s understandable,” he said.

Another area the state’s education system should be tweaked, Ragan said, is deciding what the end result in education should be.

“That’s not true. We need more people in the trades. Take a welder who’s making a six-figure salary,” Ragan said.

“There are students who don’t want to go to college, who aren’t suited for it, or would just rather do something in a different vein.

“But,” he added, “We still need those college graduates — the architects, the lawyers — we need all of these. We all live here.”

The state, Ragan noted, is looking at ways to get beyond the plateau. Tennessee has come a long way from 49th and the goal should not be to settle for 35th, he said.