CHS grad Kelley Wandell is the ‘Queen’ of Maryville College 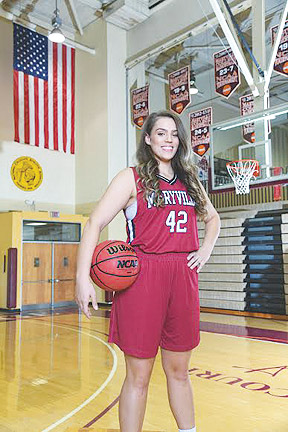 Wandell currently is playing her fourth basketball season for the Lady Scots and also played volleyball there four years.

She has not only been a leader on and off the courts, but serves in several leadership capacities within the MC community.

“She has done everything I have asked her to do on the basketball court,” Lady Scots Coach Darrin Travillian said of his 5-11 post player.

“Everyone on this campus knows Kelley and they respect her. She has been a tremendous representative for the college. She is well balanced and is the type of person we are proud to have going to school here. Kelley does everything the right way.”

Wandell has been focused this winter on the basketball court as the Lady Scots have been in the thick of the race in the USA South Athletic Conference, which encompasses schools stretching from Virginia to Alabama. The Lady Scots have defeated two NCAA Division III top 20 teams.

“Kelley has started some, but she usually comes off the bench and plays like she is a starter,” Travillian said. “She is our top rebounder and has had games where she finished with a double double (double figures in points and rebounds).

Wandell, who graduated from Clinton in 2016, originally went to MC intent on playing only volleyball. However, Clinton Lady Dragons basketball Coach Alicia Phillips – who played basketball for the Lady Scots about a decade ago – called Travillian and said Wandell’s basketball abilities could help his team as well.

“Kelley has always played with full commitment in both sports and has easily transitioned from one to the other,” Travillian said.

Wandell hit a setback during her freshman year when she tore her ACL during basketball season, requiring surgery. She fully recovered and picked up where she left off when the next volleyball season started and has been going at full throttle in both sports ever since.

“I came here to play volleyball, but I’m glad I decided to add basketball,” Wandell said. “After I tore my ACL, I wasn’t sure how things would work out, but I worked my way back and I’m happy with what I have been able to accomplish here.”

While Wandell has spent plenty of time in the MC gym, her major is political science. She has served two years as a dormitory resident assistant and is president of the college’s student athletic advisory council. She and her boyfriend were selected Homecoming Royalty last October.

“I love this school and I enjoy being involved in a lot of different things,” Wandell said.

Phillips was Wandell’s basketball coach during most of the period between sixth and 12th grades. The Lady Dragons’ coach is not surprised by Wandell’s college achievements.

“I watched her grow as a person and as a basketball player from the sixth grade on,” Phillips said. “Anything you asked Kelley to do she would do. She got better every season and that has continued in college.”

“Kelley is the full package,” Schram said. “She is a dedicated and focused student – fully involved in campus life. Her smile lights up the room.”

As Wandell missed part of her freshman basketball season due to injury, Schram said she has a year of eligibility remaining after this season, giving her the option to play again next winter if she desires to do so. That is a decision she’ll have to make sometime down the road.

“I’m thinking about attending graduate school, I’m still playing basketball and this is my senior year,” Wandell said. “My focus is on these things for now.”