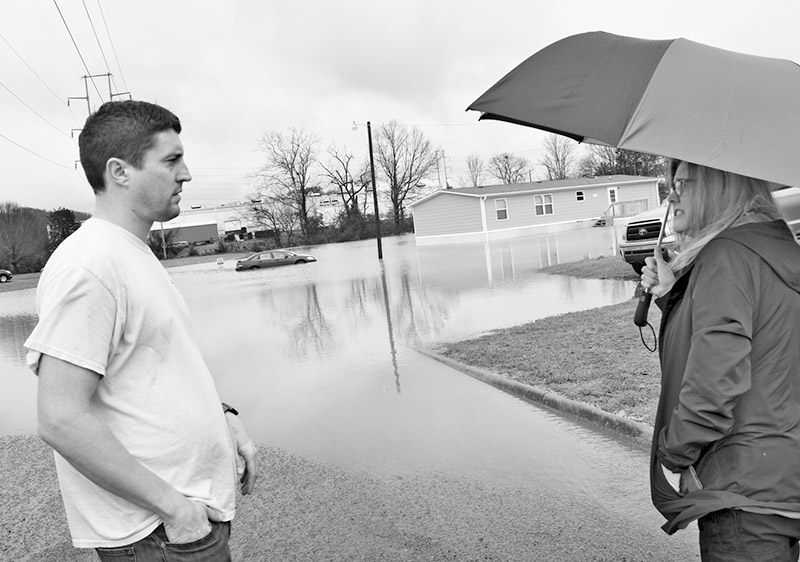 Daniel Waite, a manager with the Bloomfield Hills mobile home park off Buffalo Road in Clinton, looks over the flooding in the park last Thursday (Feb. 6) with Karen Ooten, program manager for the Anderson County Emer- gency Management Agency. Water partially submerged some cars in the park, but did not get high enough to flood any of the mobile homes. (photo:G. Chambers Williams III )
Anderson County schools were out last Thursday and Friday because of minor flooding of some rural roads, but the county came through the heavy midweek rains without any serious damage and without any reported injuries, according to the county’s Emergency Management Agency.

There was a scare on Wednesday afternoon, however, as John Creek overflowed its banks in the Bloomfield Hills Manufactured Housing Community off Mountain Road and nearly reached floor level of several homes.

But the floodwater peaked before getting into any of the homes, even though at least two parked cars were partially inundated, according to park manager Daniel Waite.

“The water started coming up overnight (Tuesday),” he said.

Some residents did leave their homes at the west end of the park off Cuzin Ray Lane on Wednesday morning as the water rose, and “those cars did get pretty wet,” Waite said.

“The rain stopped in the early afternoon, and it started slowly draining,” he said. “The water was pretty much gone away by about 6 p.m.”

One doublewide home had water up almost to floor level, but Waite said later that “their house is totally fine.” He said he could not remember the creek rising that high ever before.

Waite was keeping an eye on the flooding around noon last Wednesday when Karen Ooten, program manager for the Anderson County Emergency Management Agency, showed up to check on the water.

She said Monday that no homes there were affected by the water, nor had she heard of any other homes getting flooded in the county.

But Waite said Monday afternoon that he was getting nervous with the new storms that were moving in and bringing more rain. As the rain poured on Monday, Ooten said she and her co-workers were keeping an eye on the new storms.

“We’re in contact with the National Weather Service and TEMA [Tennessee Emergency Management Agency] to keep us updated,” she said. “We would call out the Anderson County Rescue Squad and volunteer fire departments if we heard of any potential rescue situations.

“We did not request any of them last week,” she added.

Although there were reports of some low-level flooding of roads last week, it was not as bad as the county experienced last February, officials said.