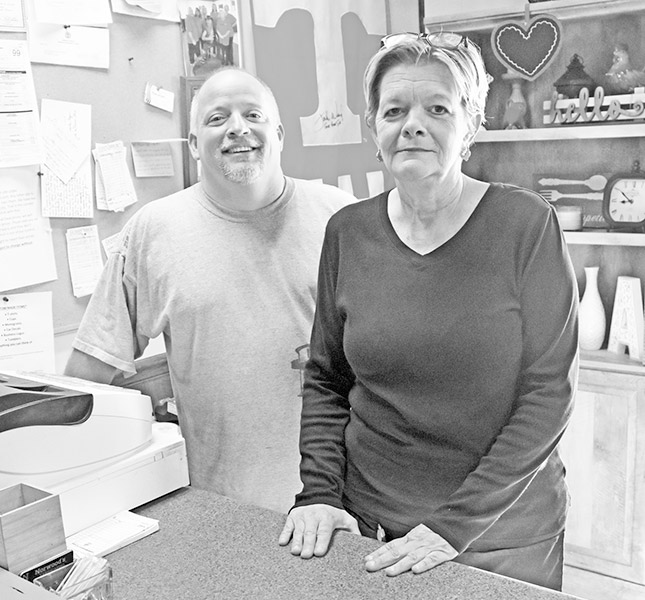 Apple Blossom Cafe partners Jimmy Taylor and Leigh Ann Young are still hoping to find the restaurant’s catering trailer, which was stolen from behind the business the night of Feb. 6. (photo:G Chambers Williams III )
Jimmy Taylor would like to get his catering trailer back.

The co-owner of Clinton’s Apple Blossom Café, Taylor also has operated a catering service in the city for 27 years – much of that time in conjunction with the cafe.

Before buying the café with business partner Leigh Ann Young nearly five years ago, he worked there for about 14 years.

He bought the 18-foot enclosed, white utility trailer about seven years ago to take catering equipment and supplies to sites where he’s catering an event.

But sometime on the night of Feb. 6, someone stole the trailer – including all of its contents – from behind the café at 409 Cullom St. His wife did not discover that the trailer was missing until Saturday morning, Feb. 8, he said, at which time he reported the theft to the Clinton Police Department.

It’s at least the third trailer stolen from a Clinton business in the past several months. Clinton Police Chief Vaughn Becker said Monday that an open utility trailer with a lawnmower on it was stolen from a business off J.D. Yarnell Industrial Parkway recently, but it has since been recovered – along with the lawnmower – and a suspect in that theft has been charged.

Brad Carter, owner of the BoxDrop Mattress store in the Tanner Place Shopping Center near Walmart also was the victim of a trailer thief, he said. Someone took his new enclosed utility trailer that he used to deliver mattresses to customers from its storage spot behind the store.

Carter said he has since replaced the trailer – which was never recovered – and has rented a secure storage space for the new one.

Taylor still has hopes the authorities might find his trailer and the catering equipment and supplies inside, but concedes that the longer it goes, the less likely it is the police will recover it.

“It was a 2002 model Trekker brand double-axle trailer with a door on the right side and a ramp door that pulls down on the rear,” he said.

“I do have a truck I use for smaller jobs, but I need the trailer for big catering events, such as those with about 250 people or more.”

It has blue carpet and a chest-type freezer inside, along with the catering equipment, some of which was stored on the trailer’s two interior shelves, Taylor said.

“I had a hitch lock on it, and had taken the handle off the jack so it would be difficult for someone to raise the hitch to connect to a vehicle,” he said. “Someone cut off the lock and left it at the scene.”

The model is a Trekker CR7, Taylor said, and it had a Tennessee trailer license plate on the back with the number 5TE7313. On the top rear corner is a faded “For Sale” sign that was on it when he bought the trailer.

“We have some catering jobs coming up that we would be using the trailer for, so I guess we will have to rent a U-Haul,” Taylor said.

“All I can do is keep my fingers crossed that someone will find it and get it back to us.”

Chief Becker said he recommends that people who leave trailers out in the open keep a secure hitch lock on them, and park them in a position where no one can back a vehicle up to the hitch and hook up easily.

“Make sure the hitch is locked with a quality lock – one that’s not easy to break. I have a boat, and if I’m going to be out of town, I park a car against the hitch. Anything to slow the thieves down or make it more difficult to steal is good.

“People also should make sure their trailers have serial numbers, and they should also make note of ways to identify it so we can spot it more easily,” the chief added. “We haven’t had a big increase in thefts, but there are a lot of trailers around.”