Public hearing on landfill full of twists and turns 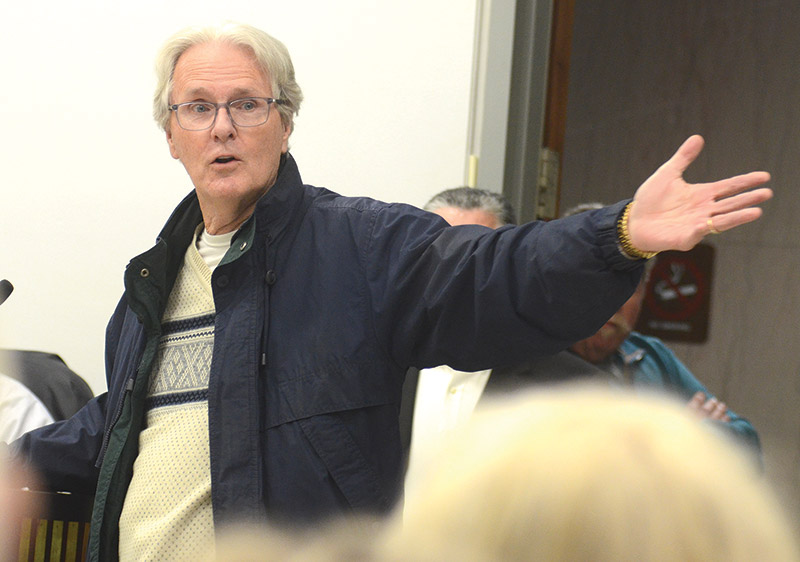 Harold Ballew, a Claxton resident, speaks during the “Citizens’ Comments” portion of last Tuesday’s public hearing on the proposed TVA landfill next to the Bull Run Steam Plant. (photo:Ken Leinart )
Anderson County Commission called for it, and they got it.

Last Tuesday, the commission held a public hearing on a proposed landfill at the TVA Bull Run Steam Plant site in Claxton.

It was the hottest (free) ticket in town.

Anderson County adopted the Jackson Law. Adoption of the Jackson Law gives local communities the final say over the permitting of landfills within their boundaries regardless of zoning.

If local lawmakers reject a landfill plan within their jurisdiction, it blocks the Tennessee Department of Environment and Conservation from processing the landfill’s solid waste permit.

The new landfill would fall under the Jackson Law if it took in waste from another site.

TVA’s stance is the proposed landfill does not fall under the Jackson Law, but …

And there’s always a “but,” Anderson County Commission Chairman Tracy Wandell said taking coal combustion residue from Bull Run and transporting it less than one-half mile away does not qualify as “on site” since the proposed landfill is not part of “the original footprint” of Bull Run.

Commissioner Tim Isbel also pointed out the acreage purchased for the proposed landfill, dubbed “Site J” was zone as residential when TVA purchased it, and is still, in fact, zoned residential.

“All that property is still residential … It will have to come through planning and zoning and then through county commission for this to even take place,” Isbel said.

One thing was certain during the public comment section of the