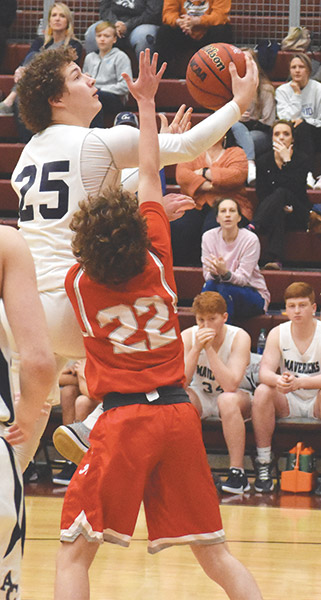 Anderson County senior and big man Nick Reed bowls through a Halls defender for a lay-up. (photo:Collin Riggs )
Mavs pull through the first round of the division tournament by the skin of their teeth.

The Anderson County Mavericks travelled to Oak Ridge High School on Tuesday, Feb. 18 to face off against the Halls Red Devils in the first round of the boy’s division tournament. The Mavericks won 53-52.

It was a barnburner of a game with neither team ever gaining more than a seven point lead and both teams holding the lead multiple times throughout the duration of the game. Anderson County took an early lead that they held on to until the final minutes of the first half, when they lost it to Halls amidst a streak of missed shots. Halls caught a hot streak and managed 14 points in only a few minutes, keeping Anderson County to only two during that time.

After the end of the half, Anderson County came out swinging, regaining the lead but struggling to hold it. As the fourth quarter wound down, fouls and small battles became the name of the game as coaches used their time-outs to stop the clock and each team tried to edge out the other until the final seconds when Carter Jett shot a free throw. He left his place and gave Halls the ball on a technicality. Down by a single point with only a second left on the game clock, Halls chucked it across the court to a player waiting in the paint, who jumped and caught it, only to lose his balance on the way down and land flat. He tried shooting the ball from the ground, only for it to be easily knocked away. Halls was given a final chance and couldn’t clench the victory.

The Mavs beat out Halls in effective field goal percentage, with 48-percent to Halls’ 42-percent, but lost out in treys by less than a percentage point, with Halls making 10 treys to AC’s six.

Other standouts for the Mavericks were Nick Reed, who came away with two steals, and Eli Varner who secured nine rebounds for the Mavs, as well as two steals.

Head coach Derek Wallace said the game was more challenging than they were expecting.

“It was a little close for comfort, but this time of year it doesn’t matter how you win just as long as you win. Halls is a tough team. We had three different kids hit three threes in three different quarters. We’d get one kid locked up only for another kid to get hot. If Halls is known for anything, though, it’s outside shooting.”

Still, Wallace said he was confident even in the low points.

“It was a strange feeling. Even if we just won by one, I never really felt like we weren’t going to win. I just sort of knew we had it.”