New snack shop opens downtown next to the Ritz 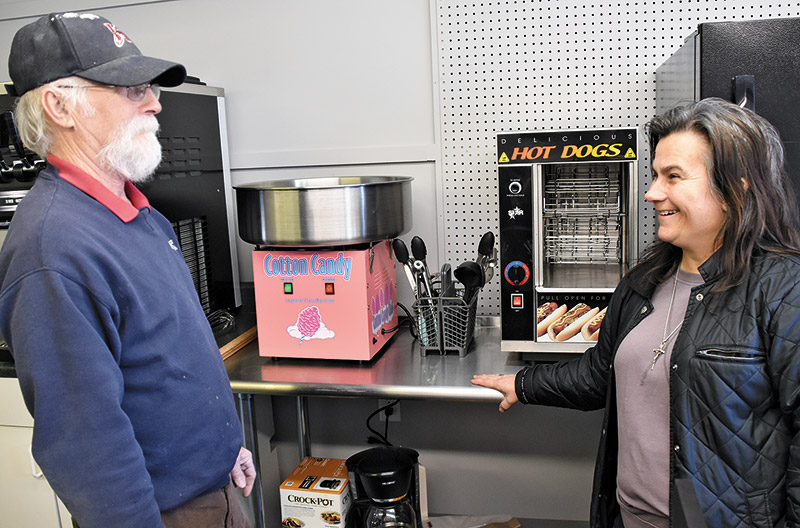 Dean Brock, left, and his daughter, Dena Helus stand behind the counter at the new Concession Stand snack bar beside the Ritz Theater in downtown Clinton. The Conces- sion Stand is open daily Monday through Saturday and evenings seven days a week. Brock is owner of the Ritz Theater. (photo:G. Chambers Williams III )
Downtown Clinton has a new business aimed at satisfying your urges to snack.

Dena Helus has opened the Concession Stand next door to the Ritz Theater at 119 Main St. to provide traditional snack foods for both daytime downtown customers and evening theater patrons.

Helus, whose father, Dean Brock, owns the Ritz and the entire building housing the theater and the Concession Stand, said she plans to keep the shop open daily until 4 p.m. for off-the-street customers Monday through Saturday, then reopen from 6-9 p.m. every day for the theater patrons.

And as for food from the Concession Stand, that will be allowed to be carried into the theater, Helus and Brock said – contrary to the theater’s posted sign that prohibits outside food or drink.

The small concession area will still be open inside the theater during movies for show-goers to buy fresh popcorn, candy and soft drinks, Brock said. Helus said the two women who help staff the concessions counter in the theater – Haley Williford and Nicole Williford – will also work in the Concession Stand next door, and a third employee will be hired for that shop.

The Willifords helped Helus clean up the shop and get it ready to open, she said.

A space of about 600 square feet, the Concession Stand once housed a coin shop and a military surplus store, and another of Brock’s daughters ran an ice cream shop in the space for a while, he said. It’s been vacant for more than a year.

There are two small tables with two chairs each inside the shop, along with a short bar with stools just inside the front window for anyone who wants to eat their snacks inside. But Helus expects most customers will buy their food to go.

Coke products will be sold, along with bottled water and coffee. No milkshakes are being offered at this point, and popcorn will be sold only at the theater.

As for a customer base, Helus hopes to get downtown workers and antiques shoppers during the day, as well as some of the downtown “after school” crowd, she said.

Brock and Helus hope the Concession Stand will be popular with the movie crowd, too. The Ritz currently has just one film showing at 7 p.m. each day, except for the occasional special event like last Saturday’s 1 p.m. premiere of a locally produced feature film.

When the theater reopened to begin exhibiting films again in 2000, there initially were features three times a day, beginning at 2 p.m., Helus said.

That didn’t last long, as “the business just wasn’t there for the early shows,” she said.