If you want to fly, Real ID driver’s license required by Oct. 1 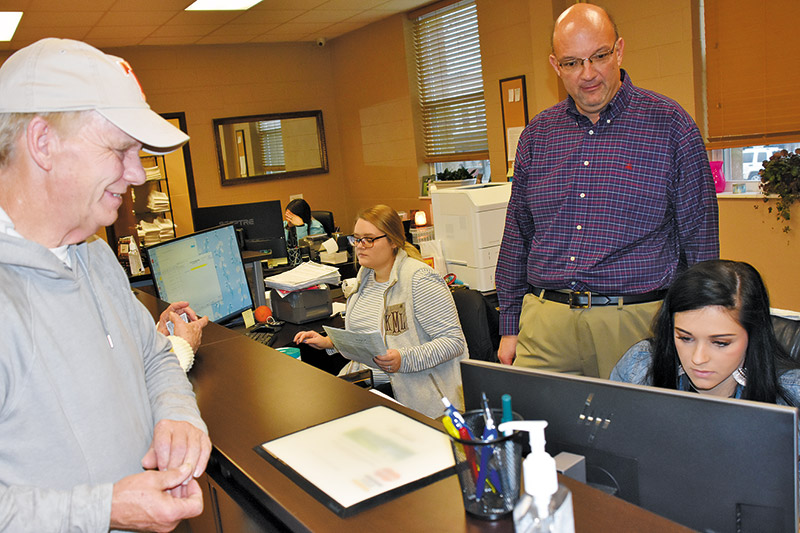 Halie Martin, seated, helps Larry Jones with the renewal of a driver’s license at the Anderson County Clerk’s Office on Monday, March 2, as County Clerk Jeff Cole looks on. The office is now processing RealID driver’s licenses that Tennesseans will need as of Oct. 1 to be able to get through airport security checkpoints.
Starting Oct. 1, anyone who wants to fly on an airline out of a U.S. airport must show a special new driver’s license with a gold star in the upper right corner to be able to make it through the security checkpoint, except for travelers who have valid passports.

And it can be an ordeal for those trying to obtain their Real ID licenses at the 44 Tennessee Department of Safety and Homeland Security full-service driver’s license offices, including the nearest one to Clinton, in Oak Ridge, where sometimes the wait in line can be two hours or more.

But here’s a secret those seeking the gold star license might like to know: the Anderson County Clerk’s Office locations at the courthouse in Clinton and at 728 Emory Valley Road in Oak Ridge are now handling issuance of gold star licenses under a special contract with the state.

And most of the time, there is little or no wait, probably because most people don’t realize they can get the Real ID licenses at the clerk’s offices, said Jeff Cole, the elected Anderson County clerk.

“We got our staff trained and certified in January, and we’ve been issuing the licenses for about six weeks now,” Cole said Monday.

“It’s a state-contracted service. We’ve had a few hiccups with the process, but for the most part, it’s been going very well.”

The Real ID program has been in the works since the mid-2000s, and was part of the federal government’s effort to beef up airport security in the wake of the Sept. 11, 2001, terrorist attacks on New York City and Washington, D.C.

Although the deadline has been postponed several times to give all of the states time to comply, the federal government now says Oct. 1 will be the final date for all 50 states to have Real ID in place, and for people to have the gold star licenses to be able to fly.

Cole said he believes the deadline might be pushed back again, however, because some states still aren’t ready. Airlines also might push back against the U.S. Department of Homeland Security if the October deadline proves to be unrealistic and threatens to create havoc at airport security checkpoints.

But Cole said Tennesseans should be ready if they take advantage of the state’s efforts to create a smoother process by allowing county clerks to issue the Real ID licenses in about 40 of the 95 counties.

“We are seeing the traffic pick up now that the word’s getting out that we are also issuing these licenses,” he said. “Last week we did about 450 of them between the two offices. We’re steady, but we’re not out in the hallway yet. The rollout has been quiet so far, but we’re excited to do it.”

The clerk’s satellite office in Andersonville is not yet issuing the Real ID licenses, but might be added if Cole can get the necessary additional computer equipment from the state, he said.

And for now, the gold star licenses are optional – people who have no intention of flying commercially can opt to renew their licenses without the special documentation, Cole said.

For those who have valid driver’s licenses that are not yet near the time for renewal, a Real ID license can be issued for a $12 fee, which is what the state charges for a duplicate to replace a lost or damaged license.

Each successful applicant at the clerk’s office must be photographed again, and the clerk handling the transaction will give the applicant a temporary license – without the gold star – to use until the state mails out the gold star license in about three weeks, Cole said.

Basically, the applicant must provide proof of citizenship such as a state-certified birth certificate (no photocopies) or valid U.S. passport; verification of Social Security number, such as a Social Security card, federal W-2 or 1099 tax form, or payroll stub with Social Security number; and two documents of proof of Tennessee residency, such as current driver’s license or concealed-carry permit, utility bill (no mobile phone bills), insurance card or policy, voter registration card, vehicle registration or title, housing rental or mortgage contract or deed, bank statement (no more than four months old), payment receipt for property tax, or installment loan documents.

Married women who have changed their last names from what is showing on their birth certificates must also produce their marriage license.

License clerk Halie Martin at the Clinton office said the marriage license requirement has been the main reason for some people to face delays in getting their Real ID licenses issued. And even though the state’s website says a valid passport card may be presented in place of the passport itself, the computer system has not been allowing that substitution so far.

For complete information about the documents needed to obtain the Real ID license, visit the state’s website at tn.gov/tnrealid/requirements.html.