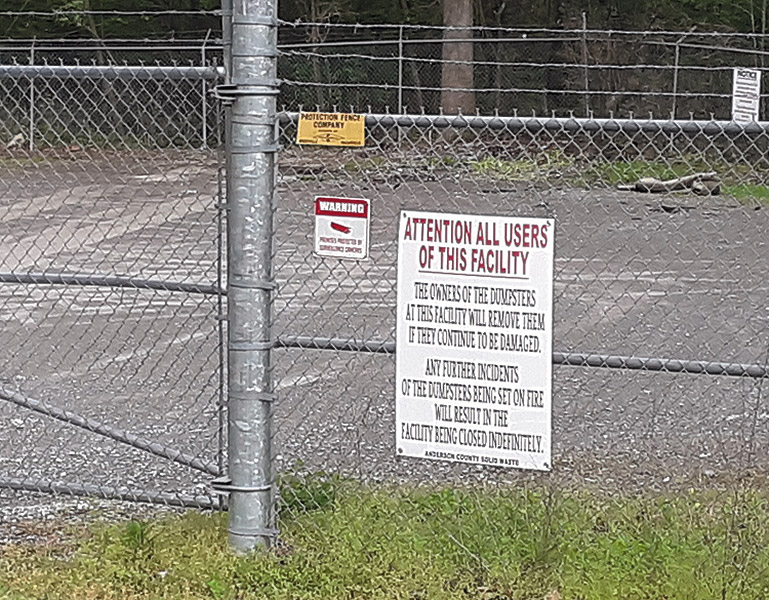 Waste Connections plans to return two dumpsters to the Cage's Creek green-box site on New River Highway this week after removing them last week after one was set on fire. Anderson County warns that the site will be permanently closed if the vandalism continues.
Who is setting the Cage's Creek Convenience Center’s dumpsters on fire?

Anyone who knows and can give Anderson County Mayor Terry Frank enough information for a successful criminal prosecution could collect a reward of at least $1,100.

The vandalism of the trash receptacles at the convenience center along New River Highway (Tennessee 116) west of Briceville has been going on for the past three years, with the latest incident occurring last week, on Tuesday night, Frank said.

Dumpsters at the unattended site are provided to the county under contract by Waste Connections, and that company has told county officials that the vandalism must be stopped, or there will be no more of the bins left at the site.

The dumpsters cost up to $6,000 new, and the fires weaken them and eventually destroy them, said Geoff Trabalka, solid-waste coordinator for Anderson County.

On Monday, Frank said she doesn’t understand why people would be destroying the dumpsters, since they are put there for the New River community.

“They are a convenience for the citizens, and I’m still for that,” she said. “The boxes will be back this week. They also help us in terms of illegal dumping. My family was from New River, and we saw that people would literally throw their trash over the side of the mountain.

“We had someone this past week someone dump 200 mattresses on Echo Valley Road. We had to go clean that up.”

Frank posted on her Facebook page last week that she was “personally offering a $200 reward for information leading to the arrest of the vandals.”

In subsequent posts, the amount of the reward kept climbing as other people, including County Commissioner Shain Vowell, pledged additional amounts. By the end of the day Friday (May 8) the reward had reached $1,100.

“So with 50,000 things on my desk to get done, I’m going to step away to deal with someone out there who is behaving like fool and ruining it for the rest of us,” she wrote. “At 9:45 p.m. Tuesday night, our Solid Waste Director calls me to let me know that once again, someone has set fires to our dumpsters at [Cage's] Creek in the New River area.

“We’re working on a solution to get the dumpsters back, as Waste Connections has pulled them until we can guarantee security. We’ll get that handled ASAP. In the meantime, here’s where I need your help.

“When people vandalize like this, rarely ever do they go back to their home and keep quiet. They’ve laughed about it with a friend. They’ve taken a photo. They’ve had a beer or two and talked about it.

“When the rest of us have to pay to build up security walls for one person who needs an attitude adjustment, it just makes me sick when I see all the other places these limited resources need to go. To fighting addiction, child abuse, senior care, PTSD, and more.”

The convenience center there has a security fence around it that is locked at night, but the criminal or criminals responsible for the fires are throwing “Molotov cocktails” -- bottles filled with an inflammable liquid with a burning rag wrapped around the outside – over the fence and into the dumpsters to set the fires, Trabalka said.

“They chuck Molotov cocktails into them,” he said. “That’s one of the least-densely populated areas of the county. We’re really not supposed to even have [a convenience center] up there, but we do it for the community. If the damage doesn’t stop, we will have to close it.”

He said Monday that both of the dumpsters would be replaced this week, but whether they remain depends on whether they are vandalized again, or the vandals are caught and prosecuted.

“It’s time this person gets his/her mind right. I’m here to help track you down, hold you accountable and give you the opportunity to repent and redeem yourself in the community. Accountability is coming. Justice is coming. We’ve got a litter pick-up vest and trash bags waiting for you at our county jail.”