It’s not the spirits of inmates past haunting Brushy 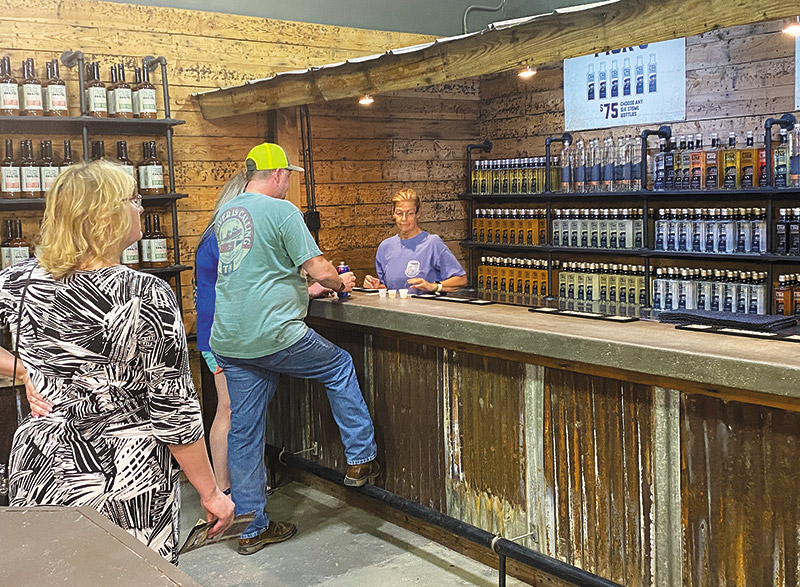 Guests check out whiskey samples in the gift shop at the Brushy Mountain State Penitentiary tourist attrac- tion, distillery and event venue Saturday, May 16, in Petros. The prison has reopened for visitors and tours after being closed for the coronavirus pandemic. (photo:G. Chambers Williams III )
There most definitely were more people trying to get into Brushy Mountain State Penitentiary than get out last Saturday, as the historic facility reopened to guests for the first weekend since the coronavirus pandemic shut down most tourist attractions two months ago.

Some staff at the gift shop and restaurant building said the crowd was the largest they had seen in some time, as loads of people apparently were ready to get out and explore after being mostly locked down in their own homes over fears of the virus.

It also helped that Saturday was perhaps the most springlike – or almost summerlike – weekend day of the year so far.

Out in the parking lot, there were cars, trucks, sport utility vehicles, motorcycles and side-by-side all-terrain vehicles everywhere. But it was clear in the gift shop that people were trying to keep social-distancing in place.

“Everything here is open, and people are enjoying themselves,” said gift shop worker Ashley Watson.

Visitors also were out in numbers over the weekend for two other local tourist spots, the Museum of Appalachia in Norris and the Little Ponderosa Zoo and Rescue near Clinton, both of which reopened the previous weekend.

But the Brushy Mountain State Penitentiary off Tennessee 116 in Petros, just outside the Anderson County line in Morgan County, had the biggest and most-diverse crowd.

The infamous prison that for decades housed James Earl Ray, the murderer of Dr. Martin Luther King Jr., closed permanently as a penal facility in 2009.

But it was reopened in 2018 as a tourist destination, run by Chattanooga businessmen Brian May and Pete Waddington. They formed the Brushy Mountain Group in 2013, which leased the property from the Morgan County Economic Development Board. That board had purchased the 86-acre prison property, including all the buildings, from the state of Tennessee for just $10, with the goal of turning it into a tourist spot.

The Brushy Mountain Group opened a distillery at the property, and also operates the site as an event and concert venue.

The public can tour the old main prison building and even “The Hole,” the infamous solitary-confinement area for misbehaving prisoners. Tours can be either guided or self-guided, with former prison guards and some of the ex-prisoners available to lead tour groups.

“It was really neat walking through the prison and seeing all of that history,” said Jean Mitchell, who visited with some friends on Saturday.

The prison opened in 1896, and initially was on a 286-acre tract that included several underground coal mines that were worked by the prisoners. After mining operations ceased, the state of Tennessee moved 200 acres of the prison property into the adjoining Frozen Head State Park.

The remaining 86 acres stayed with the prison, and it includes some of the now-abandoned coal mines.

State law changed in 2009 to allow distilleries to operate in many Tennessee counties outside Moore and Coffee counties, which are home to the Jack Daniel and George Dickel distilleries, respectively.

That paved the way for May and Waddington to build the distillery at Brushy Mountain. Morgan County, which is mostly dry, allows the distillery to offer samples of its liquor to visitors, and also lets them buy bottles of whiskey to take home.

Brushy Mountain also is allowed to sell beer to be consumed during concerts. The restaurant there is popular for its barbecue and other Southern comfort food.

Normally open seven days a week, Brushy Mountain is limiting visitors to Thursdays, Fridays, Saturdays and Sundays for now, and is open from 10:30 a.m. to 7 p.m. Tour tickets are $12 for adults; kids under 12 are admitted free through the end of May.