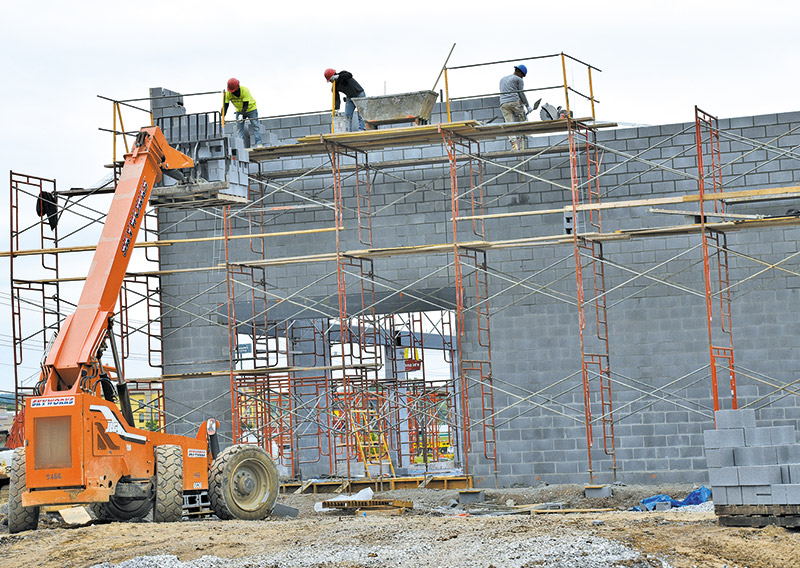 Workers on a scaffold put concrete blocks in place for a wall of the new Buddy’s BBQ restaurant on Charles G. Seivers Boulevard in Clinton. The new restaurant, being built on the site of a former Shell gas station, is scheduled to open this summer. (photo:G. Chambers Williams III )
The walls are going up for the new Buddy’s bar-b-q location on Charles G. Seivers Boulevard in Clinton.

Developer Andy Hillmer of Southern Commercial LLC. real estate in Knoxville said Friday that construction of the building, next to the site of the old Shell/Baskins-Robbins location across from Arby’s, should be completed by August.

Mark Lemoncelli, CEO of the Knoxville-based Buddy’s chain, has said that once construction is completed, it would take about two months to outfit the interior and install the restaurant equipment so the new Buddy’s could open.

Hillmer said preliminary plans also call for building a small strip retail center on the site of the old Shell station, but that project is on hold until tenants can be recruited and signed up for the center.

He also said that earlier plans for a Popeye’s chicken restaurant next to Buddy’s have been scrapped, and the chicken chain is no longer interested in coming to Clinton. A larger tract on the hill behind Buddy’s remains open for development and could accommodate a big-box retailer or a midsize building, a hotel or an office complex. But Hillmer said so far there are no prospects interested in that property.

“We’re excited to be making our way into the Clinton market,” Lemoncelli said earlier. “We hope we’ll be well received.”

Buddy’s, which was started in Knoxville in 1972 by the late Buddy Smothers and his wife, Lamuriel, is known for its barbecued pork and chicken, as well as its ribs and lemon ice-box pie. It’s also differentiated from other barbecue restaurants by its drive-through window, which will also be a feature of the Clinton store, Lemoncelli said. The store will have a staff of about 30, with about half of those full-time employees, he said. There will be about 3,600 square feet of space, with room for about 90 diners inside, and three or four tables on an outdoor patio, he said.

The menu will be the same as that of other Knoxville-area Buddy’s locations, Lemoncelli said. That will include beef brisket, which has recently been added back to the Knoxville-area menu.