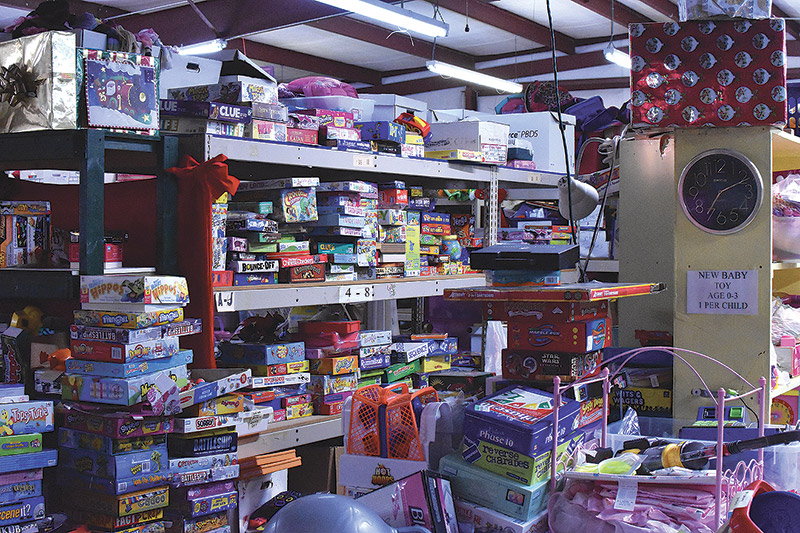 A snapshot of the donated board games at the Holiday Bureau that still have to be sorted through and checked for all their pieces. (photo:Collin Riggs )
With an economy slowly recovering from a devastating pandemic the past three months, and parts of the country quite literally burning down, it’s understandable that some things haven’t gotten the attention they deserve.

Understandable – but not excusable.

The Holiday Bureau is one of those institutions that could use some attention, and some help, to carry out a great cause.

The Holiday Bureau, for those unaware, is an independent nonprofit that gives food vouchers and gently-used toys to children during the holiday season.

It was founded by returning G.I.s after World War II, who realized there was a need in the area going unfulfilled. They went around collecting items and giving them away to families in need, ultimately resulting in the founding of the Holiday Bureau.

It’s also for this reason that, for many years, the Holiday Bureau was associated with the American Legion.

In the 1960s, the then-president of the Holiday Bureau, Nate Johnson, made the decision to break away from the American Legion and become an independent nonprofit, complete with its own seven-member board.

For most of its life, the bureau has used donated space in buildings, including the old dormitories and the office of the American Civil Liberties Union, but, after a fire burned down one of its spaces, the bureau held a large fundraiser to build its own space where it sits now, just off Emory Valley Road.

The reason that the Holiday Bureau only works with Anderson County families is because, at one time, it was sponsored by the County Commission.

Even now, the land where the building sits is still owned by the county, even though the organization owns the building.

The building itself is a massive thing with a maze of shelves stacked high with dolls and puzzles, computer monitors and game systems, action figures, boxes and boxes of legos, bicycles, and everything else one could imagine.

Sharon Crane was the one who showed me around. She’s been with the organization since she was a little girl.

“My mother’s good friend, her husband was with the American Legion when the bureau was still associated with them, so my mother would go down and help her,” she said.

“Actually, the very first day my mother went down there was the day President Kennedy was shot. It was probably three years after that, in middle school, the Holiday Bureau was by the turnpike, in the dormitories, and I started walking over there after school and helping.”

“When someone donates something, we try our best to be frugal with it, but we’re always in need of something, whether it’s money, or maintenance on the building, stuff like that,” Crane said. “We have a website, but we don’t have anyone that’s too tech-savvy to keep it up to date, so if anyone would like to volunteer to help us with that, it would be a real blessing. Monetary donations are great, because we use it the buy the parts missing from some of the donations we get.”

Website work is going to be especially important this year, as Crane said the coronavirus is making the group re-think how it schedules volunteers, especially since most of the volunteers are retirees.

“This year we may be changing the way we sign up, away from person to person,” she said. “We’re looking at moving to online or mail-in registrations this year, but we haven’t decided. Because of the virus, though, we’re having a difficult time getting volunteers to come and work. Most of our volunteers are retired, and a lot of them have health issues, so right now we’re not going to the Holiday Bureau building as much as we did before. It would be good to get some younger volunteers, especially those who need the volunteer hours for Tennessee Promise. Some people who know the toys a bit better than the older folks.

“Say you get a dollhouse that comes in and the railing might be broken or it needs painting, we have volunteers fix the railing and paint it,” Crane said. “Baby toys have lots of parts to them, and sometimes they don’t come in with all their parts. Everything has to be washed too. We don’t give things out that are junk; we try to make them as close to brand-new as we can.”

Many churches and schools hold toy drives for the bureau, with one of the largest annual donations coming from the Episcopal School of Knoxville.

Food City also works with the bureau to provide food vouchers each year, and many restaurants donate food to feed volunteers closer to Christmastime.

Even though the majority of the fund-raising and volunteer work comes in October, the bureau is behind this year because many of the regulars had to take months off. Christmas is still half-a-year away, but, rather like Santa himself, it takes them all year to prepare for it.

“Our biggest fundraiser comes around October,” said Crane, “because people have a generosity about them when it comes to Christmastime. So we do get more [in October], but during the summer we get a lot of non-monetary donations that we give away in November, like toys and cleaning items.”

Charity shouldn’t be a once-a-year thing, and now, with record unemployment and unrest across the country, it’s more important than ever to take care of the people around us, and invest in the community in which we live, whether that be with money, donations, or just giving enough of one’s time to paint a dollhouse or put a puzzle together to make sure all the pieces are there.

The bureau accepts almost anything a child could conceivably play with, from crafting supplies to toys to bicycles and tricycles and wagons, as long as it’s in good condition (or volunteers can fix it to make it into good condition).

“Every single toy that a child would play with, we get,” said Crane. “Boys’ and girls’ toys, it doesn’t matter.”

Currently, anyone who wishes to volunteer time to the Holiday Bureau or to donate can call 865-483-7831.

I kept trying to think how to end this, but, personally, I think Mrs. Crane said it best. After taking me all through the place, and excitedly pointing out all that the volunteers do, just before I left the bureau, she looked around at the maze of toys and boxes with a smile on her face.

“You should see this place right before Christmas,” she said.

“All the toys are stacked up and boxed all nice and neat, and all the curtains are thrown back. Many a child’s dreams have come true right here.”