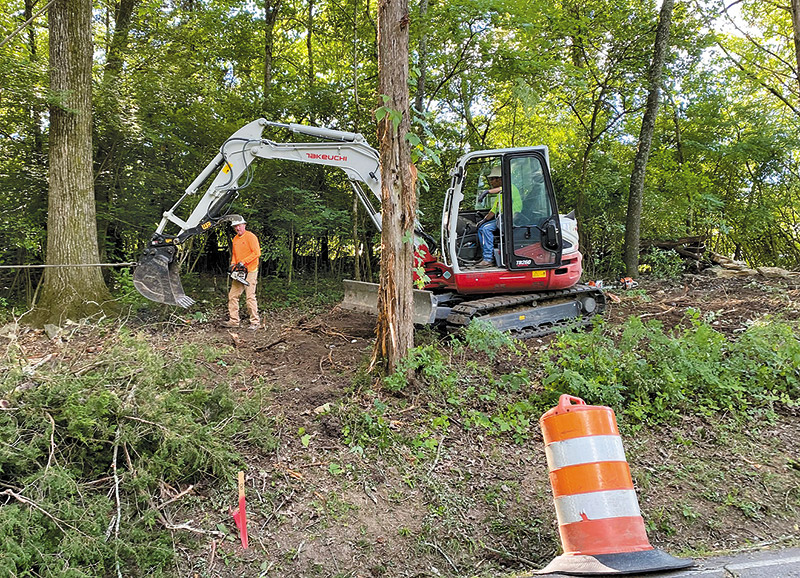 Workers with Adams Construction Co. of Kentucky carve out a path through the trees along East Norris Road for the new sidewalk that will run from Dairy Pond Road to Andersonville Highway. The sidewalk is scheduled for completion by late August.
The last major link in the Norris sidewalk network will soon be in place, allowing people to stroll on dedicated pedestrian walkways through the entire city all the way from Norris Freeway to Andersonville Highway.

Construction has begun on the East Norris sidewalk project and is scheduled to be completed by late August, Norris City Manager Scott Hackler said. It will run along East Norris Road from Dairy Pond Road to Andersonville Highway (Tennessee Route 61).

Marker flags and stakes have been put in place to outline the route, and workers are now removing trees, grading the route, and installing drains and other components for the $347,000 project.

At Andersonville Highway, it will “loop into the parking area of the shopping center,” Hackler said. “There will be pedestrian signals at the traffic light.”

The new sidewalk “zigzags quite a bit,” Hackler said. “There will be a few trees taken out; some are in the way. But some old-growth trees will be left in place to have some shade,” forming a canopy over part of the sidewalk.

Part of the sidewalk crosses over right of way deeded to the city from the old Norris Creamery property by Jerry and Ellalyn Crossno, he said.

The sidewalk runs on the east side of East Norris Road, and ties into the existing East Norris and Dairy Pond road sidewalks at the intersection of those two roads.

It also will run right through the front yard of a house that just recently sold to new owners next to the self-storage facility, on the Dairy Pond Road end of the project.

Hackler said he stopped by to let the new homeowners know about the sidewalk plans, and found that “they were excited about it. They said they really wanted the sidewalk to come through in front of their house.

Adams Construction from Kentucky has the contract for the sidewalk construction, and soon will be ramping up the work with a larger crew, Hackler said.

Under terms of the grant the city received to pay for the project, “They have a 90-day construction window, and they have been doing a lot of surveying and putting out stakes,” Hackler said.

Still pending is the Safe Routes to Schools sidewalk project, which also is expected to begin during the coming budget year.

It will run “from the post office around to the bus circle in front of the middle school, and there will be a portion that runs across the back of the library” for access for disabled people under federal ADA rules, Hackler said.

He added that it “will be several months before we start, but it should begin in this new fiscal year.”

“We got a two-year extension on [the grant funding],” Hackler said. “I’m not sure when we will go to bid. We’re still waiting until we get the utilities certified.”

Meanwhile, the Tennessee Department of Transportation “has been out surveying for four or five weeks” to set a route for the Sawmill Road extension to Norris Freeway (U.S. 441), Hackler said.

“They’re kind of finalizing … to get an idea of what properties are involved,” he said. “At this point, they are trying to map out the proposed route. Then they will start property acquisition.”

The road will come out onto Norris Freeway right beside Covenant Life Church, approximately across the highway from Cross Pike Road.

Norris also has entered into an agreement with TDOT for a long-term, no-cost lease on property fronting on Andersonville Highway between East Norris Road and the church.

The city originally was hoping to get the deed to the property from TDOT, but the state agency decided it wanted to hold onto the land for potential widening of the highway.

“The city can use the land for public use with a no-cost lease, but if we want to make any major changes, we would have to go through TDOT,” Hackler told the City Council. “Apparently they have long-term plans for the property [and] they do not want to have to buy it back.

“We weren’t planning on any major changes down there anyway,” Hackler said. “We considered some extra (event) parking to the right end of the cul-de-sac area … [and] potentially a dog park in the upper corner near the tree line, with some kind of path between Sycamore [Place] and East Norris Road to the potential Creamery Park.”