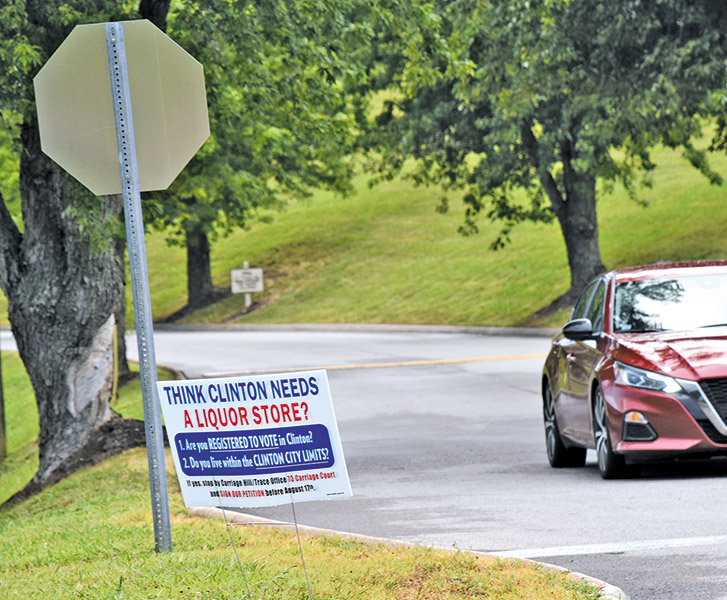 A sign promoting a petition drive to try to bring pack- aged liquor stores to Clinton on the Nov. 3 election ballot is posted at the entrance to the Carriage Hills/Carriage Trace apartments on Saturday, July 25. (photo:G. Chambers Williams III )
Clinton could soon have its first packaged liquor store if proponents of the idea can gather enough signatures on petitions to put the question on the Nov. 3 general election ballot, and the city’s voters approve.

The petition drive was begun about two weeks ago by Tracy Hooper, property manager of the Carriage Hill/Carriage Trace apartments, and the effort is backed by local developer Joe Hollingsworth, Hooper said.

Organizers must submit petitions with at least “357 valid signatures” to qualify to get the measure on the November ballot, Hooper said she was told by the Anderson County Elections Commission.

“We’re shooting for well above that so we can make sure we have enough valid signatures,” she said. “We were told it had to be 10 percent of the voters in the last governor’s race. Anyone registered to vote who lives in the city limits is allowed to sign.”

Hooper said the petition drive “officially started at the Get ‘n’ Go,” and that so far, “It’s going pretty well. We stood outside the Get ‘n’ Go for a couple of days. We also tell people we can come to them to sign the petition.”

Hooper said she doesn’t know of anyone yet who has any interest in opening a package store in Clinton.

“Mr. Hollingsworth supports it, and we think it would be good for the town,” she said. “It would bring in jobs and tax revenue. I think it’s kind of silly we’re the only city in Anderson County that doesn’t allow liquor sales. Right now, people have to go to Norris, Rocky Top or Oak Ridge.”

Posters promoting the drive for signatures have shown up on popular local social media sites, including the “I Love Clinton!” Facebook page.

Hooper suggested that the actual vote in November could be close on the question of allowing liquor stores in town.

“The comments on the social media posts have been running about 50-50 pro and con,” she said.

That makes sense, because when the measure was last voted on, in 2001, it failed by only “three or four votes,” said Clinton City Manager Roger Houck. On that same ballot, he said, liquor by the drink passed by three votes.

“I’d heard it might happen,” Houck said of the latest move to get package stores on the ballot. “I got something on it in the mail the other day. I haven’t dealt with it since I’ve been city manager, which is 10 years.

“But as a city, we will stay neutral on it, and let the people decide.”

Under state law, the measure has to be on a general-election ballot; it can’t be put on a primary ballot. All it needs to pass is a simple majority of “yes” votes.

But if the measure fails, it can’t be put on the ballot again for two years – or four years if at least 60 percent of the voters disapprove the measure, state law specifies.

A plus for cities is that once the issue is approved, they can pass an ordinance enacting an “inspection fee” of up to 5 percent of all wholesale purchases of alcoholic beverages made by the package store, and that tax is collected by the wholesaler, who must turn it over to the city.

That’s in addition to local sales taxes the city would collect on any retail sales of products by the package stores.

By state law, city voters may choose whether to approve or reject package stores, but once they are approved, the stores are licensed and regulated by the Tennessee Alcoholic Beverage Commission, and cities have virtually no control over them other than zoning.

“The city can possibly limit the number of stores,” Houck said. “I have no idea how much revenue it might bring in.”

Patrick Cameron, owner of Clinch River Tattoo & Coffee Co. at 114 N. Main St., has been supporting the ballot initiative at his store and on social media.

“I was approached by the manager of Carriage Hill apartments,” Cameron said.

“She dropped off a petition. I believe it makes sense. Right now, we’re losing tax dollars to other cities. Even many people who don’t drink think it’s better to have more businesses here to get tax dollars.

“It’s better than raising property taxes, and it’s better to keep that dollar here,” he added.

“So far, it seems pretty positive. On the ‘I Love Clinton’ page, there are a couple of sad faces. On my personal page, I’ve had a lot of good response out of it,” he said.

Cameron has some of the petitions at his store that people can sign, he said.