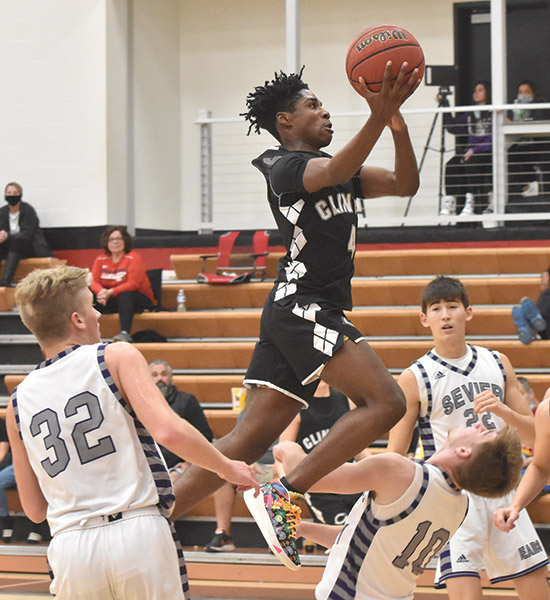 Rishon Bright bowls over a Sevier County player jumping for a shot. (photo:Collin Riggs )
For “Hall of Fame” games, the Clinton Dragons received an early indication of just good they can be, getting a split against Bradley Central (a 70-65 loss) and Sevier County (a 72-63 win).

The Dragons started the day against Bradley Central, winning the first two quarters handily and going into the second half leading 44-36 before dropping off sharply to let Bradley Central gain the advantage, leading to to the loss.

Jackson Garner led in points for the game against Bradley, finishing with 38, including a phenomenal seven treys.

Behind Garner, Lane Harrison came in with seven points, while Jeremiah Blauvelt and Trace Thackerson tied with six points apiece.

Thackerson and Blauvelt played phenomenal defense, though, with each one coming away with six defensive rebounds.

Blauvelt also finished the game with two steals, second only to Garner’s four.

The team had 45-percent accuracy from the three-point line.

Directly after the loss to Bradley Central, the Dragons took the court again, this time against Sevier County. While the game against Bradley was much more one-sided, with one team clearly dominating in the first half, and then that switching in the second, the game against Sevier was much more piecemeal and patchwork, with Clinton leading 20-18 in the first quarter, only to be outscored by one in the second quarter to start the second half ahead by only one.

Sevier County had given the Dragons a run for their money in the first half, but lost their rhythm in the third, scoring only six points to Clinton’s 16. Sevier County did come back in the fourth to edge Clinton 16-14, but it was too late, and the deficit in the third gifted the Dragons the win.

Meanwhile, the Dragons actually improved on their game against Bradley when it came to treys, finishing with 50-percent accuracy from the three-point line.

Just like in the previous game, though, the majority of those threes came from Jackson Garner, who finished with 31 points and seven treys out of nine attempts.

Behind Garner, Lane Harrison came in second with points, finishing with 18, on top of five rebounds, a steal, and three assists.

Clinton Head Coach Chris Lockard said he was a little wary of scheduling both teams, but he’s pleased with how the team performed.

“Bradley and Sevier are both really good teams that have a lot of returning players from substate, and I wanted to see where our kids were,” Lockard said.

“I thought maybe I’d scheduled just a little over our head, but we walked away with a mindset that we should have won both instead of just one.

“We led most of the game against Bradley and had a two-minute lull where we missed some opportunities for uncontested points. We left about eight easy points out there, and they got back in the game and took the lead.

“They were up one and we went to a trapping defense on a time out, almost got the steal, they missed the shot and got the offensive rebound.

“Really, it was a one-possession game. They hurt us on the boards, but we won every other stat. So we probably let one slip through our fingers there, but by a very good basketball team.”

“Sevier County is extremely talented, and we did a great job on their best player,” he said.

“We took a small lead early, and then in the third quarter we really opened up. Jackson Garner was phenomenal, and I thought Trace Thackerson handled our offense extremely well, getting the ball where it needed to be.

“Rishon Bright and Lane Harrison were both competitive, and Tyler Morgan was our best rebounder. A lot of the things Morgan does go unnoticed, but he did so much to allow us to get shots and he defends so well.”

Overall, Lockard said he’s glad to see how well the team performed this past week, and thinks that such a strong start is a good way to get the players right into the mindset of what this season will be.

“I was a little surprised to see us perform at such a high level in both games,” he said. “We’re young and we’re trying to learn and get better without using the fact that we’re young as an excuse. We’re trying to hold ourselves to a bit of a higher standard.

“Our schedule is so tough that I really hope it pays off at the end of the season, but it’s going to be a heavy weight on their shoulders throughout. We have no easy games, so to start out with Heritage, Bradley, and Sevier County was a pretty good test for these kids.”