December 2, 2020 by Fred Strohl Special to The Courier News 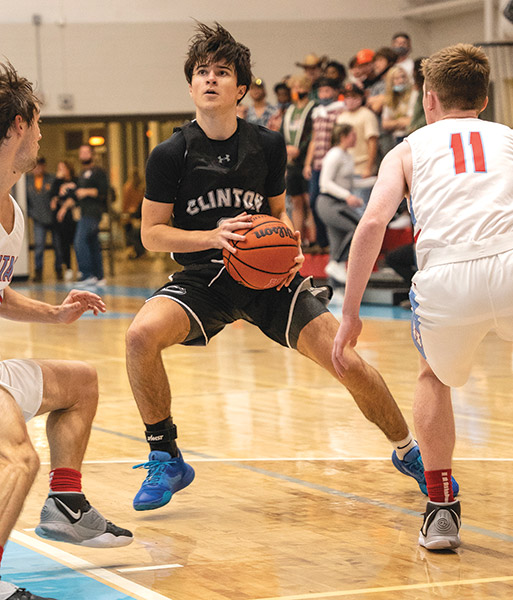 Garner broke the 50-point record set in 1998 by Jermaine Shepherd. Thirty of Garner’s 54 points came via three pointers. He scored three treys within less than a minute late in the third period to help the Dragons break out of a tight game.

Clinton Coach Chris Lockard said he had a premonition Garner would set a record.

“I just had that feeling,” said Lockard, who made a special pregame presentation to Garner for scoring his 1,000th point in his Dragon career in a tournament game last season.

“Jackson has been shooting well and I even told him before the game I thought he had a chance to set the record,” Lockard said.

Playing their home opener, the Dragons had the upper hand against the Highlanders during the first period, leading 20-12 after eight minutes.

However, G-P scored 12 unanswered points early in the second period to move the game into a nip-and-tuck battle where the lead changed hands several times before the game was tied at halftime 32-32.

“We let it get away from the us,” Lockard said of the second period. “We knew were in a fight, but I also saw our guys determined to keep up that fight. They (G-P) got ahead again early in the third period, but then Jackson started making all of his shots and we were executing well as a team and that’s why we were able to come back and eventually go ahead.”

Garner’s four threes during the third period, including one at the buzzer, gave the Dragons a 55-48 advantage heading into the final eight minutes.

“We are a team that likes to have balanced scoring, but with Jackson moving toward the record, we wanted him to have that opportunity,” Lockard said. “I had to encourage him during a couple of timeouts to keep shooting and scoring.”

Lockard said Garner deserved the honor of becoming the all-time leading scorer in a Clinton game.

“Jackson is a hard worker and a great player,” Lockard said. “What we saw tonight was a great performance.”

As the Dragons’ scheduled game at Anderson County Friday has been postponed due to covid concerns with the Mavericks, the Dragons will host Jellico at 7 p.m. Friday. The Lady Dragons are still scheduled to visit the Lady Mavericks Friday. Hopes are for the boys’ game to be made up later in December.