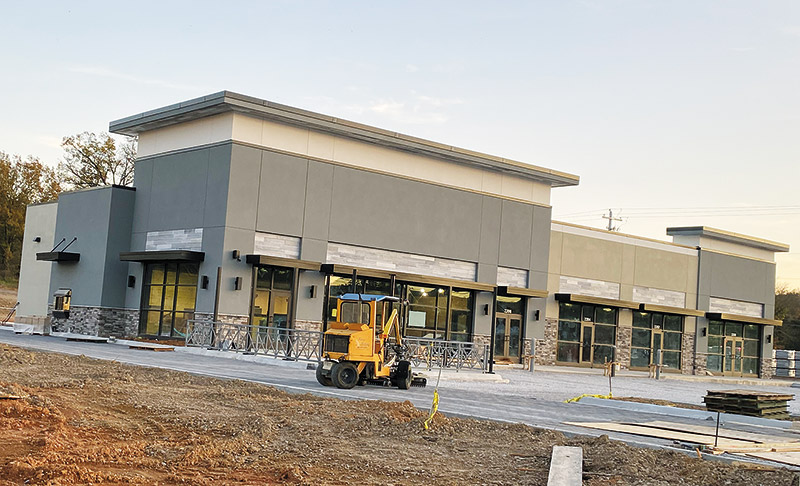 This $1.18 million building for the Glen Alpine Retail Center on North Charles G. Seivers Boulevard was among the more than $52 million in building projects issued permits by the city of Clinton during all of 2020. This building now houses the new Clinton Buddy's bar-b-q restaurant in the space on the left side. The restaurant opened in mid-December. (photo:G. Chambers Williams III )
Despite the coronavirus pandemic, which was expected to wreck the local economy this past year, the city of Clinton issued more than $52.46 million worth of building permits in calendar year 2020, a recent record.

“I think it’s positive proof our city is growing and going in the right direction with commercial, industrial, residential and recreational projects,” Clinton City Manager Roger Houck said Monday after the city’s Planning and Zoning Department closed out the year and released the complete list of permits issued.

Clinton Building Inspector John Householder, whom the city hired away from the town of Farragut just 19 months ago, said Monday, “We have tripled our business since I got here.”

He previously had worked as a building inspector for Oak Ridge for 10 years before going to Farragut. Houck said he had told Householder that the job probably would be a lot less busy here – which turned out to be just the opposite.

Houck said the city’s growth surprised him after hearing dire predictions early in the pandemic in March that city revenues might end up being cut in half because of COVID-19 shutdowns.

“Even with COVID, our budgets and revenues have stayed neutral or positive,” Houck said. “And we’re seeing growth we didn’t think we’d ever see with COVID.”

Some of the biggest building permits issued by the city during 2020 included:

There were building permits issued for 25 new single-family residences during 2020, including several in the new subdivision next to Anderson County High School ranging from about $245,000 to $315,000.