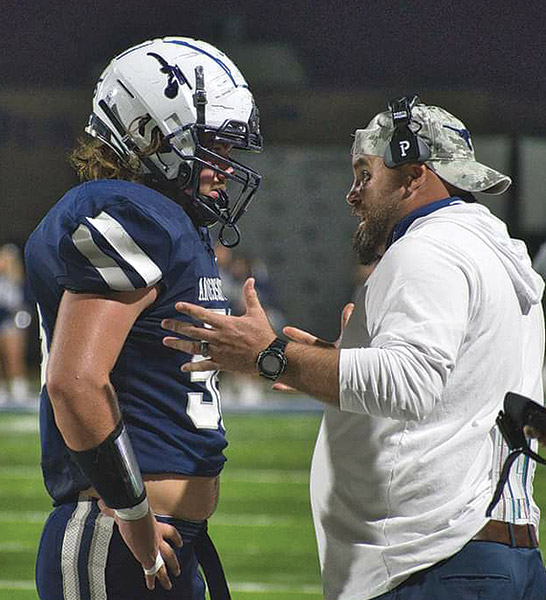 Stone Cummins gets instructions on the sideline.
Stone Cummins, like Daniel Bethel, has become a household name throughout Anderson County since his transfer from Webb his sophomore year.

Now, as a senior, he’s considering what he’s going to do next.

“Right now, I have 35 schools that have shown interest in me,” he said, “But my top three are Tusculum, Coe College in Iowa for wrestling and football, and Center College in Kentucky.”

With all the schools that have shown interest, Cummins said one of his biggest considerations has been whether he thinks the school “wants to win.”

Cummins said he wants to own gyms after he graduates from college, which is what his father and grandfather have done. When asked what initially attracted him to Anderson County from Webb, he said it was a “little bit of everything.”

“The program, the coaches, the atmosphere, the huge shows at games, the people,” he said. “All of it. At Webb, we had 600 people come to a game if we were lucky. At AC, you can’t find anywhere to sit. They love football so much here, and that’s what I wanted to be around: people who loved the sport and wanted to be successful.”

Cummins said he has a hard time thinking of a favorite coach or teacher, not because he doesn’t like any of them particularly well, but because he’s liked all of them so much.

“All of them,” he said. “I know that’s the politically correct answer, but I don’t have any coach that I don’t like. I was around the linebackers coach, Coach Cross, the most. He and I are really close, but I love all of them. They’re all great Christian men, and there’s none of them that I wouldn’t want to be around. Coach Sloan is a wrestling coach as well, so I get double time with him.”

It’s always interesting to see what attracted an athlete to their sport of choice, and in Cummins’ case, it was his father.

“I’ve always loved being an aggressive kid, and I loved how aggressive football was,” he said. “I’ve always been around that kind of environment. I started when I was 4. My dad played football for Carson Newman. He didn’t push it on me or anything, but it was something that we could do together. He’s always coached me. We’ve always done football and workouts and everything together.

“That’ll probably be another deciding factor in college for me, wherever he feels is best. I always want him to be around and be happy with my decisions, so that’s a big part of the decision for me.”

Cummins said that COVID-19 this year has actually been a positive for him.

“It allowed me to work out all the time and eat and take naps and be able to spend a lot of time working out,” he said. “My lifts went up like crazy because of being able to focus on that. I didn’t have to focus on school as much because it was hard to figure out Zoom and everything else for so long. A bad effect was my senior year of wrestling kind of got shut down. Another con was that we didn’t get to have crazy amounts of people at the games like we usually do.”

Rather like his favorite coach, Cummins said he has a hard time narrowing down his favorite moment from his time at AC.

“There’s just so many good ones to choose from,” he said. “Probably the three-time region champs. That’s something that’s never been done at AC, and I’m one of a select few that’s been a part of that. There’s so many good moments at AC that it’s so hard to pick. I’m not a big award guy for me individually. Team-wise, I like awards, but for me personally, my biggest award would be two-time all-state in football and two-time in wrestling (hopefully). I’m one-time in wrestling, but hopefully I can make a second time, too, if we have a season this year. I’m not a big bragger, so I have a hard time with individual accomplishments and awards. They make me uncomfortable. I don’t like talking about myself.

“I get told that I’m the hardest worker to ever come through Anderson County and I enjoy that,” Cummins said. “It means a lot to me. Coach Chadwell says that talent is cheaper than table salt, and I really took that to heart and I tried to work as hard as I could during my time.”

Having had such a positive time at Anderson County High School, Cummins had some words of wisdom to pass down to his younger teammates.

“Enjoy it,” he said. “It flies by way faster than you realize it does. My sophomore year, I thought that the season was dragging on forever, but then my senior year has flown by way faster than I wanted it to. Don’t worry about what anyone has to say, because they’ve picked us to not be very good two years in a row and we’ve been very successful both times. We’re the winningest program in Anderson County. Just enjoy it. It’s over way quicker than you realize.”