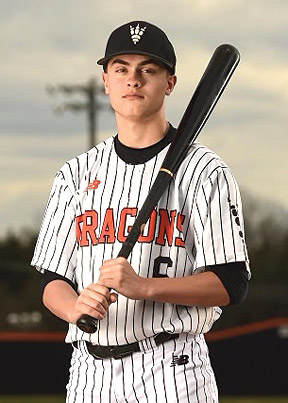 ANDREW WEEKS
Andrew Weeks is the senior for Clinton High School this week.

Rather than a multi-sport athlete, Weeks plays only baseball.

“I’m not a jack of all trades or anything,” he said.

“I was kind of on and off before middle school, but probably played since I was in third grade,” Weeks said. “I only played middle school ball my eighth-grade year, but I played travel ball and stuff in between.

Weeks said he wasn’t always drawn toward baseball, and only really picked it up after his family moved close to the baseball fields from Norris.

“In Norris, I wasn’t really into it,” he said, referencing the sport. “I got asked to play soccer a lot back there, but I wasn’t really good at it. Mostly just tripped people. I moved not too far from the fields by Jaycee Park and just sort of started playing. My stepdad helped get me into it, since he played when he was a kid.”

Weeks said he’s had a hard time figuring out what he wanted to do after his high school career, but has finally settled on a plan.

“For the past four years, I had no clue, but then I’ve always been good with kids,” he said. “I didn’t really want to teach or anything. I looked around, and my parents recommended I check out social services. I know they don’t get paid a whole lot but it’s more of a calling than getting rich off of it. I got a couple offers from different places, so I guess next I’m going to find out the best one for me and just go for it. After that, we’ll just see.”

When asked where he’s thinking of attending, Weeks had a smart reply, saying that getting to this point has been his biggest accomplishment.

“Everyone’s always considering community colleges around here. I’ve been accepted to ETSU, UT Martin, UTC, Maryville, and a couple others. Maryville gave me a whole bunch of money, but it’s still a lot more to go there. Carson Newman gave me an offer. All these are academic offers. I don’t know if I’m going to play college baseball. I just figured out what I want to do academically, and I feel like I need to focus on that. Right now it’s figuring out which one will be the cheapest.

My grades were terrible freshman year. After that I picked it up and grinded and I started caring a lot more. I’m up in my room now, seeing all these papers on my desk with dollar signs on them from colleges. You never expect that as a high schooler. My biggest accomplishment has been probably figuring all of this out, figuring out what I want to do with my life, and being smart enough to carry through.”

Speaking further on his grades, Weeks said there were specific teachers that really helped him get things together, and made it a joy to go to school every day.

“I would say there’s a specific handful of teachers that, when I went through their class, it made me feel better. Whenever I’m with someone that’s mentally invested in the thing they’re teaching me. Until Coach Stacy came, I just had a couple of those, and they stood out. Coach Stacy came and he’s so invested in coaching and teaching weightlifting and it’s been nothing but positivity since. My favorite moment, I was in Mr. Scarpino’s class and had Coach Stacy and with both of them, I was just always happy to come to school for once in my life. At the same time, I made a bunch of good friends that were positive and positive influences for my life and things just started going well.”

One of those positive influences was Weeks’s teammate, Mac Lowe, who Weeks said is one of his mentors.

“I know that sounds like kissing up to a teammate, but in middle school I met Mac, and he’s always been a better decision-maker than me. It’s all of them, though. All of my teammates are amazing, and they’re all positive influence. I say Mac mainly because of everything I’ve learned about decision-making from him, and about being a leader. He’s kept me out of so much trouble.”

When asked if there was any wisdom he wanted to leave with his younger classmates, Weeks implored people to “give things a second look.”

“One of them is my younger brother, and I would say that whenever they’re looking up and seeing these seniors that seem so rude and not good to be around, I’d say give it a second look, because you don’t know what they’re trying to do for you. Sometimes they don’t know they’re doing for you either. Leaders come in all shapes and sizes. Sometimes the best thing you learn aren’t the things you’re trying to learn.

“There’s so many kids, so many, who actually have something worth talking about, and it’s up to their peers to help them. I’ve seen it happen first hand, and I was part of it. We just have to be better to each other, because those people might be worth something, even if you don’t see it. That’s how America was born, everybody having their say, and now we’re a superpower. Clinton could very well be a superpower if everyone would pitch in a little bit and help each other to do so, but you have to encourage it. You have to let these people shine. I wasn’t a great kid, and the positive change was just because people who didn’t have to be nice to me decided to be nice to me. The main point is just: Be better.”