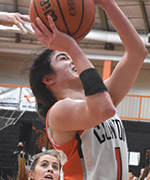 Hoops district tournament is this week

It’s tournament time in basketball as the post-season plays out this week.

With Clinton secured in the No. 2 spot, it doesn’t play until Saturday.

Meanwhile, Anderson County has a long road if it wants to make a play into the post-season, starting out against Halls on Tuesday, Feb. 16, then, if the Mavs win, following up with Central on Thursday, Feb. 18.

On the girls’ side of the tournament, Clinton secured the fifth seed, while Anderson County landed in the eighth, leaving them to start the tournament off against each other on Monday, Feb. 15.

After Clinton won that game, the Dragons travel to face Campbell County away on Wednesday, Feb. 17. The winner of that game moves on to face Oak Ridge in the semi-finals on Friday, Feb. 19 at Oak Ridge.

The Dragons have positioned themselves in a strong spot, with their most-likely opponent being Central to determine who makes it to the final round. The Dragons have beaten Central twice this season, but Coach Chris Lockard, when asked about the post-season, was quick to point out that “it’s hard to beat any team three times in a season.”

“Our main focus right now has got to be who we play in that semi-final round,” he said. “That is the most-important game, and if we’re lucky enough to win that, then yes, we’ll focus on our next opponent. At this time of the year, though, I try not to look too far ahead, since so much can change. My philosophy has always been – at this time of year – improve on what you do best, fix your weaknesses as best as possible, and then prepare for who you’re playing. You’re not sure who you’re going to face from day to day.”

Lockard said that, no matter what happens, he’s proud of his team.

“With this year, basically all underclassmen coming back, our expectations were high within, but I think people were unsure of what we could accomplish,” he said. “I’m really proud of this group. They’ve worked so hard to put themselves in this position. You don’t always get an opportunity to work with that. It’s definitely been a fun year to watch this process and their progression. They’ve worked to get there.”

Across the bridge, Anderson County travels to Halls to fight for the chance to play Central. Anderson County has traded with Halls, losing one and winning the other by a comfortable margin, while the Mavs lost both to Central, albeit by a single basket.

Derek Wallace, the head coach for the Mavs, said he’s confident about the first game.

“We play Halls on Tuesday, and then at Central on Thursday when we win.”

Wallace said that Halls is a challenge for the team with their size, but that AC can also use that to their advantage.

“They’re a lot like Clinton, but they don’t have Morgan and Harrison, just a bunch of Thackersons out there. They’re a challenge for us with their size. We can take advantage of that size on the glass and on offensive if we’re determined to do that, which we will be determined to do.

“Central beat us at their place pretty good, and we missed a shot at the buzzer to win at their place,” Wallace said. “They are probably the most-physical team in the league. They’ve got five kids over six-foot-two to start. They’re pretty put together and athletic. It’s a challenge for us, just like it is for everyone in the league, but I think we can compete with them. We just have to play a better game than we have so far.”

Head coach for the Lady Dragons, Alicia Phillips, said that she’s expecting a challenge from Campbell County, but the team has made adjustments since the last encounter with the Lady Cougars.

“We’re pretty evenly matched,” said Phillips. “They have four really good guards, and our post play is a challenge for them. They kind of just shut us down last time and we didn’t make too many adjustments knowing we would see them in the post-season. I look for it to be a good game. They always play better at their court and shoot better at their court, so we’ll have to do a good job of making their shots harder. Overall, we didn’t have a great game last time, so I’m looking for that to be a big game for us.

“We have to keep it out of their scorer’s hands,” she said. “They killed us on the rebounds, so we’ll have to do a better job of keeping them out of the opportunity for their second-chance points, and boxing out well.”

Phillips said that she’s also going to be relying more on two players who, while not as flashy as Jaz Moore, Sarah Burton, and Naiyah Sanders, will be crucial to the team’s success.

“Sarah Burton and Jaz Moore and Naiyah Sanders have carried our team consistently this year,” said Phillips. “Belle Starnes has done a great job of scoring and becoming more aggressive, so we’re looking for her and Lydia Snyder to score more and take the pressure off those three. All that said, I think we’re peaking at a good time. Those three tend to get double-teamed quite a bit when they catch the ball, so if our other girls are scoring and pressuring, they won’t be able to double up quite as much.”

All tournament games start at 7 p.m, with the girls playing Monday, Wednesday and Friday, and the boys playing Tuesday, Thursday and Saturday.