Mavs have ‘serious talent’ on the pitch 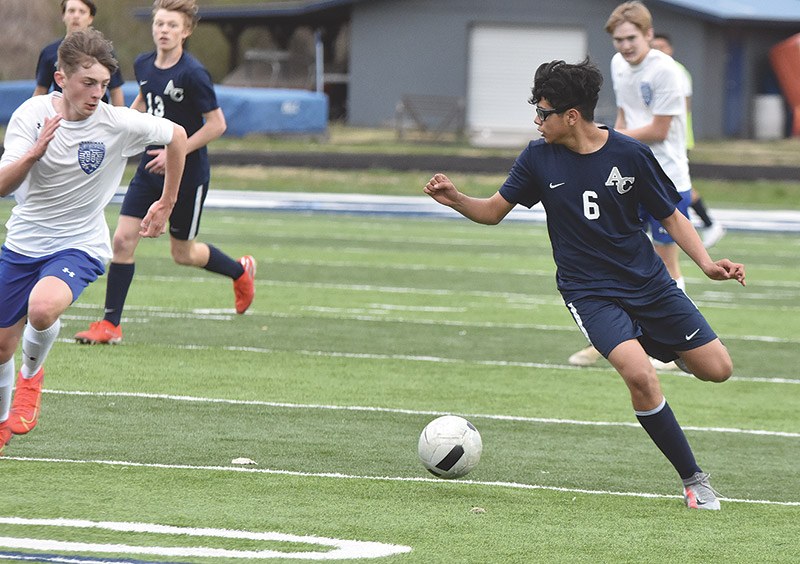 Martin Lechuga rushes the ball down the field in the team’s opening game against Harriman. Anderson County won its opener. (photo:Collin Riggs )
Baseball wasn’t the only sport that was cut short in 2020, and soccer recently started back up after missing the majority of last year’s season.

“It looks really promising,” said Anderson County High School head Coach Ron Roskelly. “We’ve got a lot of guys with serious talent. We’ve had a good mix of talent and athletes in the past, but we have 24 guys this year, which is more than we’ve ever had as far as I know. We have guys who can really dribble and shoot. We’ve always had some strong players, but this is the most talent we’ve ever had together at one time.

“It’s just a strong pedigree of soccer players that we haven’t really had before that I know of.”

The team is oddly split between youth and experience, with Roskelly saying his two biggest groups are his seniors and freshmen. Both groups have plenty of experience playing with one another, though.

While the majority of those freshmen have come from Norris Middle, Lake City contributed as well.

“A handful came through my sixth-grade class,” said Roskelly. “The rest are homegrown at Norris.”

Roskelly said that it’s been interesting to see the different dynamics between the seniors and freshmen after the events of last year and the effects that a lost season had on the team.

“It’s interesting because the seniors came back with a lot of fire, and the freshmen don’t quite understand what was lost last year for those seniors. For my seniors this year, they don’t want to lose their season, and it’s a big deal. I think my freshmen coming from middle school still believe they have plenty of time, but my seniors realize this is their last ride for AC.”

The problem, though, with having a large team and a large talent pool, is narrowing it down, and Roskelly said that’s been a hard task this season.

“We’ve got a lot of guys with their own strengths that will really help us out,” he said. “It’ll be hard to find a starting 11 because there’s so much competition for those spots. We always lean on Colin Moody for goals. He’s a fast guy with some good skills.

“We’ve leaned on Bryce Dagenheart for defense in the past. They’re both players for Knoxville clubs. We have a lot of experience.

“I know we have a freshman, Caleb Wetherington, who’s a strong club player as well, and he’s recently traveled to Memphis to play in a college invitational. He’ll be a strong player for us for four years. We’ll have him for a while. Mueller is a standout freshmen. Martinez, too. Colin and Bryce. Ethan Daggenheart has already had two or three goals in our inner-squad game. He’s not lost a lot since he walked away from soccer for a little while.”

While many coaches have been stressing or even mandating that players continue with their sport outside the official school season, Roskelly said he hasn’t been doing that with his boys, although he does tell them that it will make them better.

“I don’t really stress club play, because I know that time is valuable and school is the most important thing,” he said. “I tell them that club will make them stronger, but I don’t stress it.

“It’s like, if you want to do it, you’ll be stronger, but if not, there’s other things in life. Some people just don’t have time for it. Anytime you can play club, you will come out a stronger player, and I definitely tell them that.”

Roskelly said that, specifically because he has so many strong players this year, he let the team choose their own captains.

“We had so many more experienced boys, I let them choose captains. They picked Collin, Bryce and Tyler White. Tyler White is an outside defender, a right defender. I think his personality really helped him. He’s a really hard-working dude. He comes in and works hard and does his best, and he has a great personality and attitude and everyone likes him.”

When asked what he thinks will be this team’s X-factor for the year, Roskelly said he’s hoping the team can be skilled, that way they don’t necessarily have to be the fastest or the biggest guys on the field.

“With soccer it’s all about skill and IQ,” he said. “You have so many guys, that if you have skill and IQ, you don’t have to be the fastest guy in the world. You don’t want to be the slowest guy in the world, but you don’t have to be that fast if you have guys that can pass, so it’s that skill on and off the ball, and we’re working on that sort of pass-and-move.

“Your biggest guys aren’t always the best, because they’re less agile sometimes. Your fastest guys don’t have the best touch. It really comes down to that skillset. So, I’m hoping that’ll be our skillset and X-factor. I’m hoping we can pass around anyone and everyone and run teams to death. We’re not doing anything amazing, but we’re just capable of moving. We’ve always had a couple guys that could really move the ball, and some athletes that were working hard, but we’ve got a lot of solid guys this year.”

Roskelly ended by saying that he thinks the dynamics will produce a good team, with his players all getting along – but he still expects an odd season.”

“It’s tough when you have a lot of guys,” he said. “Everybody will buy into the system, and they can all give in and learn where they’re supposed to be – it’ll be a solid year. I think seniors being all cool with each other and the younger guys chilling with the older guys and everyone getting along – that’ll be really conducive to good teamwork.

“It’s hard to do anything else now because of COVID. You don’t want to knock your team out by being together more than they should. It’s a weird year.”