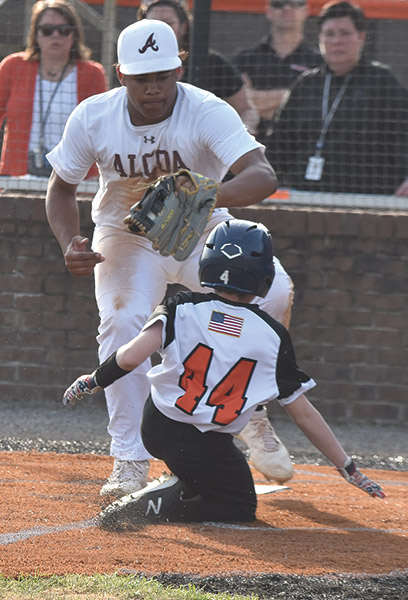 Clinton’s J.P. Robbins slides between the legs of Alcoa’s pitcher reaching to tag him out. Robbins scored a run for the Dragons, who ultimately won 11-8. (photo:Collin Riggs )
April 6 vs Northview at Home

CMS Dragons stole the lead late in the game in a 4-1 victory over Northview on Tuesday. Northview traveled to Clinton to play and got things moving in the first inning, scoring one run.

Alex Duggins brought the heat from the mound. He surrendered one run on two hits over four innings, striking out four. In the bottom of the fourth inning, the Dragons tied things up at one, when Hayden Harrell doubled on the first pitch of the at bat, scoring one run. The game was tied at one with the Dragons batting in the bottom of the fifth when Harrell singled on a 1-0 count, scoring one run. The Dragons saw the ball well today, racking up six hits in the game. Harrell and Duggins both managed multiple hits for the Dragons, racking up two hits each.

April 7 vs Alcoa at Home

There were runs aplenty on Wednesday, as the CMS Dragons defeated Alcoa 11-8. The Dragons got on the board in the first inning, as an error on Alcoa allowed for one run. Dallas Beets got the start on the mound. The pitcher allowed five hits and two runs over three and a third innings, striking out one. In the sixth inning the Dragons got amped up scoring four runs in the inning. Leading the charge for the Dragons was Sam Raley with a double and a groundout from Hayden Harrell. Alcoa scored three runs in the fifth inning. Camden Britton, Raley, Brennan Tipton, Harrell and Aden Golden each managed one hit to lead the Dragons to victory. The Dragons victory can also be contributed to the fast feet of Golden, who led in stolen bases with three.

April 8 vs Oak Ridge at Home

CMS Dragons seized the victory in dramatic walk-off fashion, thanks to a walk-off single at the end of the game to topple the Oak Ridge Wildcats. The game was tied at seven with the Dragons batting in the bottom of the eighth when Aden Golden singled on a 0-1 count, scoring one run. The Dragons got on the board in the first inning, then built a four-run lead in the second inning and held off the Wildcat’s charge. The Wildcats put up seven runs in the failed comeback. The Dragons then evened things up at seven in the bottom of the fourth inning when Hayden Harrell singled on a 0-2 count, scoring one run. Levi Smith got the start for the Dragons. The youn, fireballer surrendered seven runs on nine hits over three and two-thirds innings, striking out three. A determined Will Brooks came in as relief and held the Wildcats.

The Dragons racked up ten hits on the day. Harrell, Dallas Beets and Camden Britton each collected multiple hits for the Dragons. Harrell lead the way with three hits in four at bats. The Dragons tore up the base paths, as two players stole at least two bases, Britton leading the way with three.

The CMS Dragons defeated the Sevier County Bears 8-7 on Friday thanks to a walk-off sacrifice fly. The game was tied at seven with the Dragons batting in the bottom of the fifth when Sam Raley’s sac fly scored one run for the Dragons. Alex Duggins led off on the hill for the Dragons. He went four-and-a-third innings, allowing six runs on three hits and striking out four. The Dragons scored three runs in the fourth inning. The offensive onslaught by the Dragons was led by Aden Golden, Hayden Harrell and Duggins, all knocking in runs in the inning. This four-run lead was just enough for the Dragons to hold off the Bears for the victory. Dallas Beets went 2 for 2 at the plate to lead the Dragons in hits. The Dragons stole eight bases during the game, with Beets leading the way with two.

Even though the CMS Dragons collected eight hits to the Sevier County Bears, they still fell 7-5 on Sunday. The Dragons got things moving in the first inning, when Sam Raley singled on a 1-0 count, scoring one run. Camden Britton started the game for the Dragons. The pitcher allowed five hits and seven runs over two and a third innings. Aden Golden threw two and two-thirds inning in relief out of the bullpen.