A part of their history 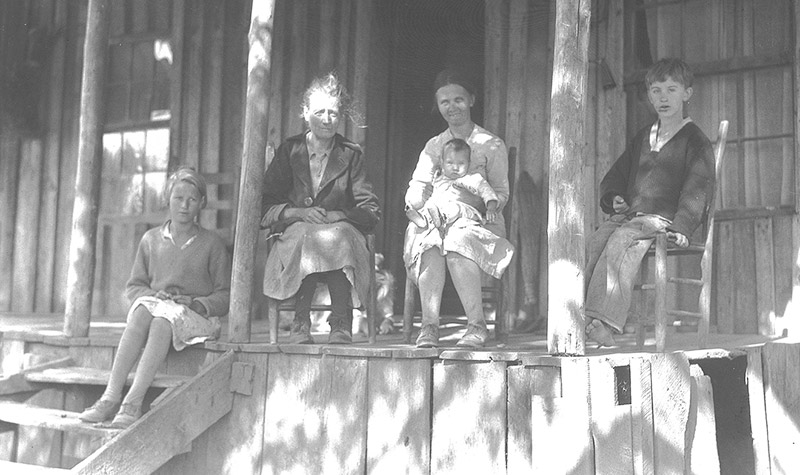 This family lived on two acres near Andersonville and was displaced by the waters of Norris Lake. The photo was taken by the renowned photographer Lewis Hine in 1933. Hine was commissioned by the Tennessee Valley Authority to come to the area for a month in fall 1933 to chronicle the displacement of the nearly 3,000 families who were moved out of the Clinch and Powell river vallieys.
Norris Dam State Park wants to help tell the stories of the “Families of the Valley” – the people whose homes, farms and communities were taken in the early 1930s to make way for the new dam and the lake behind it.

To that end, the park will sponsor a month-long exhibit at the Lenoir Museum “dedicated to the memory of those living in the Clinch River Valley prior to the completion of TVA’s first dam.”

The exhibit, which will include a series of events over the month, opens this Saturday, May 1, at the museum, along Norris Freeway just south of the dam.

It focuses on the 2,989 families who were displaced when the dam created Norris Lake and took over their homes, said Veronica Greear, manager of the state park.

“It’s part of our park story that hasn’t been told,” she said. “We thought it would be a nice thing to do for those families. I came across some TVA removal papers this past winter that got me thinking about it, and that started getting the ball rolling.”

In 1933, the newly formed federal agency known as the Tennessee Valley Authority showed up in the area with plans to build a flood-control and hydroelectric-power dam near the confluence of the Clinch and Powell rivers.

That would become the first in a series of similar dams along the Tennessee River and its tributaries in Tennessee, Alabama and Kentucky.

Dams aren’t built in voids, though, and the lakes they create take over the land much like a flash flood that never drains away.

Thus was the case upstream from the new Norris Dam, which opened in 1936 and began filling up the land behind it.

That, according to TVA’s own historical records, caused the displacement of the families and the end of numerous communities along the two rivers.

Park Ranger Mike Scott will offer a Power Point presentation discussing the lives of the residents before and after the building of Norris Dam, during a special event at 5 p.m.. Sunday, May 2, at the park office/visitors center on the west side of the park.

Greear said the Lenoir Museum exhibit will be open to the public during regular museum hours throughout May – from 9 a.m. to 5 p.m. Wednesdays through Sundays.

There will be historical documents and some artifacts from the flooded areas on display at the museum, as well as photographs by the famous photographer Lewis Hine, who was commissioned by TVA to come to the Norris area for a month in 1933 to document the removal of the families from their homes.

“They did a thorough job of documenting every family,” Greear said.

“Part of the exhibit will include a map of the area, and descendants of the displaced families will be able to put a push pin on the spot of their family’s land,” she said.

“We are also planning to record some oral histories so we can continue to tell their stories.”

Hine also documented the early construction of the dam, building of the CCC camp, and the setting up of the Norris community.

As for the museum exhibits and other events commemorating the displacement of the families, “This whole process is something we want to do once a year,” Greear said. “It’s something that’s long overdue.”

Other programs are planned through the month that complement the theme, Greear said.

From 1-4 p.m. on Sunday, May 2, will be the Rice Grist Mill Sunday Social, which will feature live local bluegrass music at the Crosby Threshing Barn; schoolyard games at 2 p.m.; and guided grist mill tours at 2 and 3 p.m. The group Friends of Norris Dam State Park will be giving out ice cream to the first 100 visitors, Greear said.

A “decoration day” will be held on Sunday, May 23, from 1-3 p.m., at the Harmon Cemetery and Burris Cemetery on the park grounds, she said.

“We’re going to be doing some beautification projects, along with an interpretive program about the people buried in those cemeteries that are from the park property,” Greear said.

“We will be doing some ranger-led hikes and other activities, which can on our website and Facebook page.”