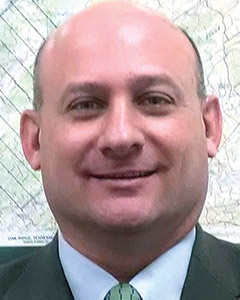 TIM SHELTON
In a statement released this week, Anderson County Register of Deeds, Tim Shelton announced he intends to seek re-election in next year’s countywide elections.

Shelton has served as register of deeds since September 2002, and has been recognized statewide as one of Tennessee’s finest registers.Shelton was recognized as Tennessee’s Register of the Year in 2004 and 2009, and additionally was elected as president of the Tennessee Register of Deeds Association in 2005. He was elected as president of the County Officials Association of Tennessee in 2013, and in 2017 Shelton received the ultimate award for a county elected official by being selected as the County Official of the Year for the State of Tennessee. Shelton credits his staff for his many accolades and awards.

“I believe that our register of deeds staff in Anderson County is one of the best in the entire state,” he said. “They are the epitome of what public servants should be.”

Shelton has focused on implementing new state-of-the-art technologies, including making documents available to the public online, dating to 1801.

Shelton added, “One of my initial goals when running for register of deeds was to put all of our documents online, making it easier for the public to access documents from home.”

“As a custodian of public records we have utilized designated funds for archiving purposes. Commission approved a Three Year Plan that ultimately allowed us to preserve our oldest deed books from 1801 through the year 1927, ensuring they would be around for many years to come.”

Shelton shared his thoughts on having to serve as an elected official during this past year’s pandemic and the office’s response to it. Tim stated, “certainly no one was expecting such a massive change to how we do business and how we serve our constituents. The adoption of new technologies a few years ago prepared us to meet the needs of the public while also protecting our citizens. Documents from our office were available online and we were able to forward copies by email as a result. Erecording, which we have been doing since 2007, allowed banks and attorneys to file online without having to even enter the courthouse. We have installed protective plexiglass which provided a see through shield for the protection of the public and our staff during the COVID crisis. I believe our response was well received and I am proud of our forethought that allowed us to serve our public while also providing the necessary caution for their protection.”

Tim Shelton has served as Anderson County’s Register of Deeds since 2002. The office phone number is 865-457-6235 and the website for retrieving documents is www.andersondeeds.com