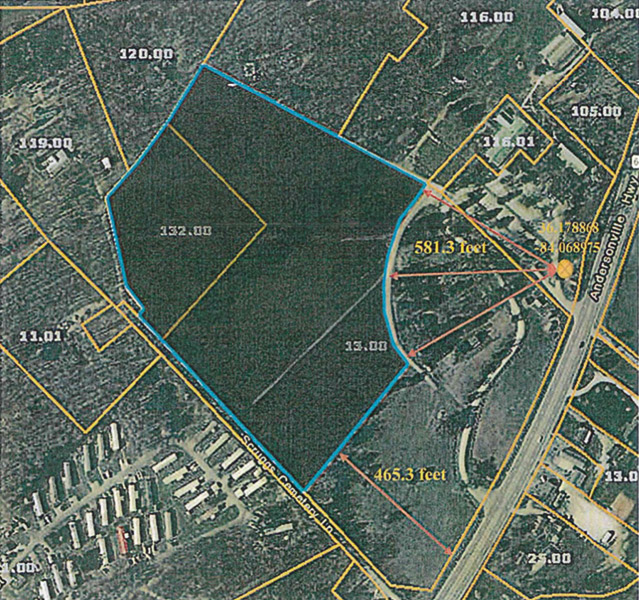 This image from the Anderson County property map shows the two parcels — Tracts 13 and 132 — that were rezoned for commercial use Monday night by the Norris City Council. They would provide 17.5 acres for a planned RV park adjacent to the Museum of Appalachia.
Despite objections from three nearby residents and a member of the Norris Planning Commission, the Norris City Council quickly and unanimously voted Monday night to change the zoning of property next to the Museum of Appalachia to commercial use.

Although Mayor Chris Mitchell and others on the council made it clear that they were voting on the rezoning, and not any specific plans for the property, some heated discussion in a public hearing before the meeting made it clear that the ultimate goal is to accommodate the museum founding family’s goal of setting up a campground and park for recreational vehicles.

It would be the first overnight accommodations facility near the museum, which sits along Andersonville Highway in the Bethel community on land that was annexed by Norris about 10 years ago.

The rezoning, approved on second and final reading, changes the property from the current S-2 (Scenic Highway District) to general commercial (C-2). The rezoning covers the address 2819 Andersonville Highway, which includes two tracts comprising about 17.5 acres adjacent to the museum. The land is owned by the family that created the Museum of Appalachia in 1969, and still controls it. John Rice Irwin is the family patriarch, and his daughter Elaine Irwin Meyer is president of the museum.

Elaine Meyer told The Courier News last month that the family is working with outside investors to develop the RV park, and plans were still being developed. They are expected to include some permanent structures, such as treehouses and cabins.

Meyer said the family expects to present its detailed plans for the RV park/campground to the Norris Planning Commission. The commission must approve the site plan for the project to move forward. As of Tuesday, the issue had not been added to the agenda for the Planning Commission’s next meeting, June 7.

The two pieces of property are Tract 132 on the Anderson County property map, a total of four acres, with Elaine Irwin Meyer listed as the owner; and Tract 13, part of which would provide the rest of the 17.5 acres for the RV park. But not all of that tract would be used for the park. Owners of Tract 13 are listed on county records as “John Rice Irwin and others.”

The move to rezone the property encountered a stumbling block in April when the Norris Planning Commission rejected the family’s request for commercial zoning, instead suggesting that the city’s S1 zoning class be modified to allow the RV park under a set of strict guidelines.

Then Planning Commission member Ed Meyer, husband of Elaine Irwin Meyer, abstained from voting on the rezoning, and later resigned from his seat on the commission. The City Council appointed former Councilman Larry Beeman to replace him on the commission during the council’s April meeting.

The City Council overruled the Planning Commission during the April meeting and voted for the rezoning ordinance on first reading, with every council member speaking in favor of the move.

The museum asked for the original move to Scenic zoning to save money on property taxes, Hackler said.

As for the RV park, “council is supportive,” he said. “It gets an overnight destination [for tourists] on this side of the interstate. There is such a demand right now for RV parks, especially after COVID. It’s overwhelming.

“This also fits well with our [Norris Freeway] scenic byway designation, and parks and other attractions on this side of the interstate.”