Gillum has Mavs looking out for each other; it’s ‘us,’ not ‘me’ 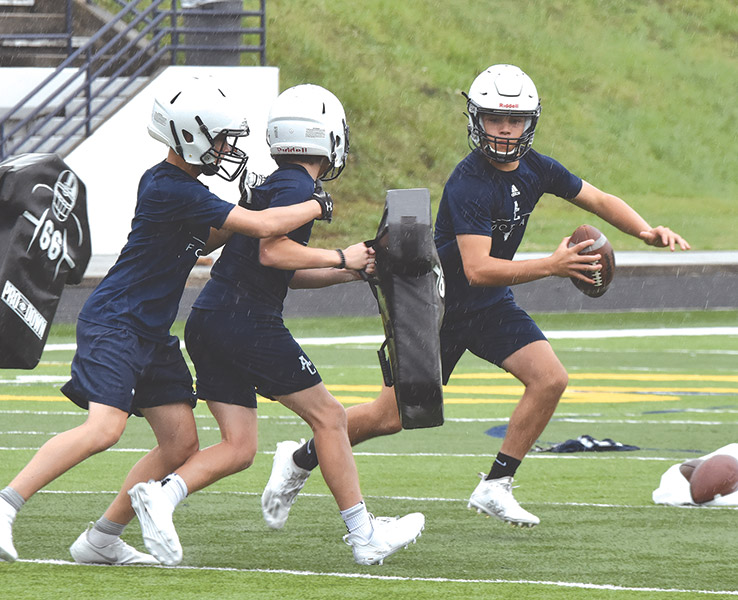 Cody Miller falls back to look for an open receiver during a rainy Monday practice for the Mavericks. (photo:Collin Riggs )
After the mess of trying to get sports up and running while maintaining COVID guidelines last year, there was the question of whether the unorthodox methods might produce some lasting drills.

Or they would teach lessons that coaches could carry forward into the next year.

With summer practice well underway, the answer, at least for Anderson County High School, is clear.

“No,” said Coach David Gillum. “Mostly it was just one big inconvenience. There’s tiny little things you had to do to be more organized and [which] made practice a bit more efficient. You implement a little bit of that, but now you have bodies to go against, so the crossover wasn’t really big for us.”

The question did lead to another interesting one, though: How often are drills changed and new ones introduced to practices?

“There’s basic things we do every year,” said Gillum. “There’s procedural things and footwork drills where the gist of them is the same, but you’re always studying to find better and more efficient ways to do things and new drills and studies to improve, as well as coaching points. We also change some things on the drill side just for variation to keep the kids focused.

“We change not just year to year but week to week, sometimes daily,” he said. “The general structure of our practice stays the same, though. There’s a certain degree of validity and merit in repping similar drills over and over, but there’s certain progress that has to be made by tweaking drills to make sure everyone is progressing and improving constantly. It’s an ongoing process on both sides.”

Clinton Coach Darell Keith said he emphasizes toughness and brute strength with his team, calling it “smash-mouth football,” and that he wanted to instill those values of strength into his players

Gillum, though, said that while every team emphasizes toughness to some extent, he wants a family environment for his team.

“There’s a lot of things you have to address in a program,” he said. “Sometimes you have a deficiency in one area and you may make that an underlying theme for practice, but there’s not a team in the country that toughness isn’t on the docket. That’s always a part of ours, but we use a ‘FIGHT’ acronym to give the players a sort of overarching theme. That acronym stands for: Family, Integrity, Grit, Heart, and Toughness. We do a lot with them through that acronym to develop them.

“The biggest thing we’re trying to build now is a family culture where the kids love and care for each other,” Gillum said. “We’re trying to get rid of selfish thoughts and actions to emphasize the team. Family is a big thing, and we’re emphasizing ‘LEO,’ which means ‘love each other.’ We want them to be ambitious and successful, but not at the expense of others. We’re trying to emphasize that it’s ‘us’ and not ‘me.’”

But how does one measure whether students are understanding that concept, let alone living by it?

“It’s hard with anyone in our country right now, but especially the high school age,” he said. “Even good kids with good families, people are always more concerned with their kid than the team. It’s an uphill battle and we’re battling it every day. Still, you can tell when the kids have bought into it.

“The biggest indicator is watching them and seeing how they interact. We try to destroy cliques and whatever those could be based on. You can just see how they treat each other. Are they good to one another? Do the better ones help the ones that are struggling? Do they feel free to interact with each other? Is there excitement for each other and other players’ accomplishments? We have a long way to go this season, but so far this team has been better in that regard than any other team we’ve had.”

Gillum said ultimately it’s up to the students and the players to determine the culture of the team, and he’s been pleased with how his players have done that.

“Probably one of the things I’m most proud of with our program is just how much it’s grown, and the buy in we have from our kids, as well as their desire to be a part of it,” he said. “I create a program and build a culture, but it’s up to individual teams and players on those teams to develop the team’s personality.

“We have some very, very good leaders right now that are not just good football players but great leaders that are caring and demanding to do things right and helping create the chemistry we’re hoping for.”