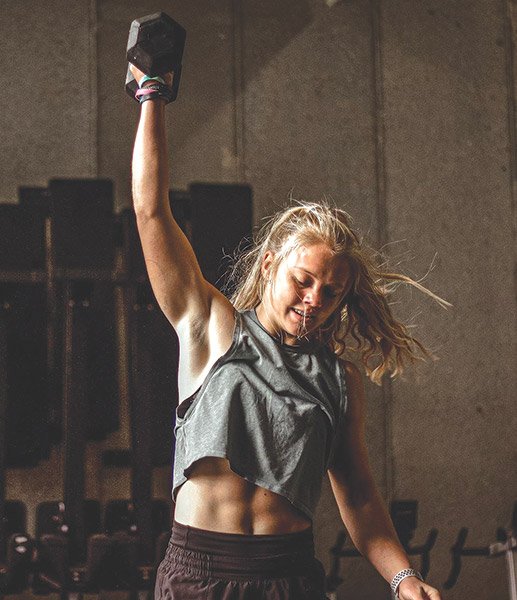 Wade’s father, Bruce Wade, said that, to a certain degree, the diagnosis has been a blessing.

“We have the perfect kid for it in a lot of ways,” he said. “For so many kids, it could be way worse. She had a pretty structured diet to begin with, so being able to figure that stuff out was easier for us because we were already used to managing her diet. We had an upper hand on that, so when we went to Children’s, it was easier to teach us what we needed to know.”

Bruce said that he and his wife, Tiffany, still worry during games, but they expect that’s normal to some degree.

“Everyone worries,” he said. “We were able to get her a monitor that helps, and if she needs, she comes off the field, adjusts her sugar, and then she’s right back out.”

The family noticed something was wrong when they were at a crossfit competition in Miami.

“We noticed her mood was a lot different,” Bruce said. “She was really irritable and hungry and losing weight. She plays for Anderson County High School and a traveling team as well. People kept telling us we needed to feed her more and that she was too skinny, but she was eating well and still dropped around 20 pounds. We went in to get her tested and her blood sugar was around 500 to 600. They thought she would go into intensive care for a little while because of it, but when they got her levels back, it turned out her body had managed to maintain everything better than it otherwise might have because of her discipline and exercise.”

Bruce reiterated that he truly believes Delaney has it easier than most teens with the disorder because of her already well-structured diet and exercise plan.

“Everything that you do and every move changes blood sugar,” he said. “There’s no math to it, it’s a rollercoaster. Every time she eats, she has to dose, and that’s what you have to watch. That’s what makes it easier for us to manage. I’m sure that 13-, 14-, 15-year-olds, there’s got to be frustration with taking a shot every time you eat, but every carb she takes, she has to base around her carb intake. She has to take a shot every night that’s a long-term shot to keep her sugar flattened out while she sleeps, but it’s a lot. The people in her life have helped, though. The people at the gym and her soccer coaches, they always check on her. The monitor we got her monitors it in real time, too.”

Even with modern technology and a supportive community around them, Bruce said there have been bumps and worries in the two years she’s lived with the condition.

“When she first started it, we would sometimes wake her up in the middle of the night just to check it because we weren’t sure what to do. We were worried.”

Bruce said, though, that the diagnosis hasn’t really affected his daughter’s performance as an athlete. If anything, according to him, it’s only motivated her more.

“It was motivation for her to work out rather than a deterrent. She saw it as an an opportunity. Her mindset was that she wanted to help others by being a good example. Of course, she has her ups and downs like anything else, but it’s not really fazed her as far as I can tell. I’m sure there’s thoughts she had that she might not voice – but she’s driven. She’s really driven. She’s fine talking about it. I don’t think it bothers her at all to talk about it, but basically, she eats, lifts weights, and plays soccer. That’s about her life. We live on a small farm, so she loves interacting with the cows and she keeps miniature ducks. She’s a well-rounded kid. She’s a really good kid.”

Delaney herself echoed the sentiment of letting her condition serve as motivation when she spoke about how it’s affected her life.

“Honestly, I don’t think it affected me in any bad ways. It just motivated me because I want to use it to inspire people and I’m no longer just doing this for me, but I’m doing it for everyone else that’s struggling with this stuff too.”

When asked if the condition has affected her schedule or how she approaches working out or practices, she mostly laughed.

“Sometimes I’ll be in a workout and be a little low, but usually I’ll just grab some juice, drink it, and get back to work. All my coaches have been pretty good with it. They all understand it, and when I get low, they’ll give me the time I need. They’ve all done pretty good with it.”

Delaney said that, despite how scared she was when she first heard the news of her condition, that she’s committed to serving as a positive example, and viewing her condition through the lens of opportunity.

“When I was first diagnosed, the doctor walked in and told me I could die, so I was scared. I was really scared. I looked at my dad and started bawling, but in the back of my head I knew that God was giving me something to help me inspire others, and that helped me stay together in a big way. Just knowing I can use this as a blessing ultimately. I want to inspire as many people as I can, because I know that God gave me this for that reason, and not for something bad.”

Delaney has faced trials at a young age that many will never have the misfortune to experience, but she’s faced it all with a smile and a determination that is exactly what she aims to be: inspiring. It’s untelling how many people, how many children or even adults, have drawn strength and courage from seeing her take her condition and use it as a tool to uplift others. Even then, though, she said that she can’t take all the credit.

“God really has carried me to where I am today. He is my strength – through everything.”