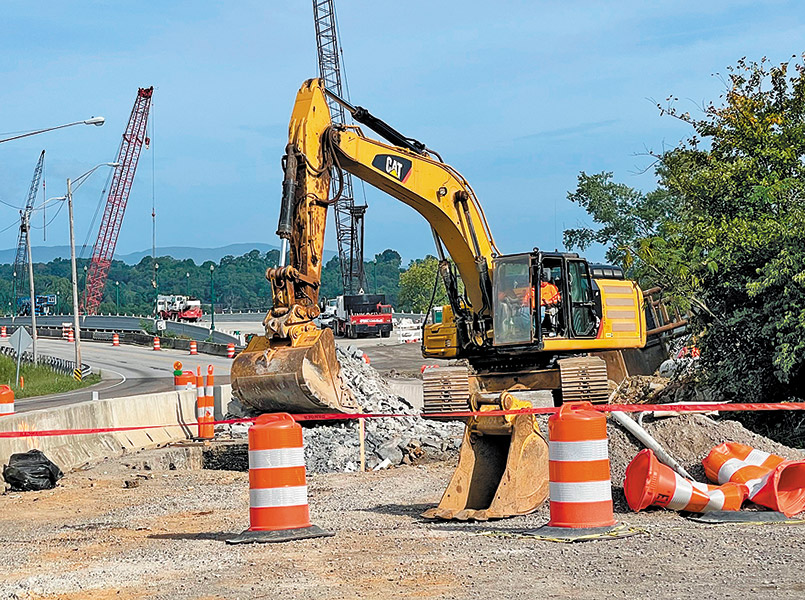 A big shovel is used to work on the northbound approach to the new Clinch River bridge connecting South Clinton to Clinton on Monday, Aug. 30. The city of Clinton says completion of the bridge project, originally slated for Aug. 31, might still be months away. (photo:G. Chambers Williams III )
The contract the state of Tennessee had with Blalock Construction Co. to build the new Clinch River bridge in Clinton expired on Tuesday (Aug. 31), yet work to complete the project is still “several months” away, the city of Clinton says.

City officials say they have not been able to get an update from the Tennessee Department of Transportation on when the Lewallen Bridge (Green Bridge) replacement actually will be finished, but that the plan announced in late July to switch at least the northbound traffic from Clinch Avenue onto the new bridge in late August obviously didn’t happen.

In fact, the roadway connections from the new bridge’s deck to Clinch Avenue on the south side and Charles G. Seivers Boulevard on the north side are still not built, and look almost exactly as they did at the end of July.

The new bridge is entirely a project of the state, and the city has no control over any aspect of it.

In a report to the city on Aug. 24, the city’s project coordinator, Lynn Murphy, said:

“The three-year contract between TDOT and Blalock for both the construction of a new bridge and the demolition of the old bridge (for $27,735,614.56) expires on Aug. 31, 2021. Obviously, the remaining work will take several months to complete.”

In an email to The Courier News on Friday (Aug. 27), Murphy said, “I am waiting for TDOT to reply with information about a contract extension, or an estimate of the completion date, but I’m not having any luck obtaining that information.”

Neither is The Courier News. TDOT spokesman Mark Nagi said via email on Monday that he is “still waiting on some answers from our folks. When I hear something I'll let you know.”

“The City of Clinton administration joins with you in wanting the bridge project completed as quickly as possible.

“Since the project began three years ago, we have made a conscious effort to help move the bridge work along as quickly as possible. We monitor the job progress daily and coordinate/communicate with both TDOT and Blalock in-person, by phone, and by e-mail.

“We try to be as accommodating as we can, in hopes of keeping the duration of construction disruptions to a minimum, but while also protecting City of Clinton interests.

“The City of Clinton has sent a request to TDOT asking them to provide an estimate of a project completion date, but we continue to wait for an answer. As soon as we have a reply from TDOT, we will share the information,” Murphy said. “In the meantime, we ask for your continued patience and understanding while this project nears completion.”

Through Murphy, the city also apologized to nearby residents for the continued impact.

“To our neighbors in the area of Meadowbrook Street, Woodmont Circle, and Clearview Street: We are aware of the construction noise, dust, detour traffic, and construction traffic that you have endured for three years, and we will also be glad when it all ends,” Murphy wrote.

“We have asked TDOT to resurface Meadowbrook Street with new asphalt once the project is finished, due to the damage caused by the hundreds of loads of concrete, stone, and steel being hauled to the bridge.”

In his report, Murphy gave this update on the bridge work that comes from his own daily observations of the work:

“Construction continues for a bridge approach on each end of the new bridge, creating transitions to connect with Clinch Avenue. Street lighting poles and fixtures have been installed on both sides of the new bridge, and the parapet wall handrails will be added soon.

“To build the bridge approaches, a compacted crushed-stone road base is built, concrete curbs and sidewalks installed, then four separate lifts of asphalt are applied. At a certain stage of completion, traffic will be moved to the new bridge. Initially, traffic will run on a temporary plan, with lane arrangements made so further bridge approach construction may continue.”

“Traffic-control signs will be installed, and new surface markings will be put down to create [11-foot-wide] traffic lanes (lanes were less than 10 feet wide on the old bridge), an [eight-foot-wide] center divider to separate opposing traffic, and a [six-foot-wide] bike lane on each side.”

As for traffic flow, “On the north end of the new bridge, northbound traffic will see the same turning lanes currently in place, with two exclusive left-turn lanes moving west toward Oak Ridge, two straight-through lanes moving north onto Main Street, and one exclusive right-turn lane moving east toward Norris,” he said.

Demolition of the old (Green Bridge) will begin shortly after all traffic is moved to the new bridge, TDOT spokesman Mark Nagi said in late July.

Also, the new bridge will carry the same official name as the one it is replacing, Murphy said: The Hon. William Everett Lewallen Memorial Bridge, or Lewallen Bridge for short.